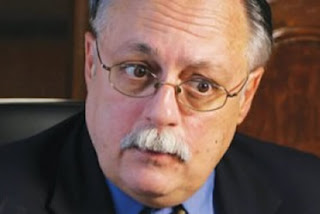 Jose Pertierra. Source of photo: Embassy of Venezuela
Some of the most detailed, colorful and insightful coverage of the Luis Posada Carriles trial comes from a lawyer, not a journalist.
Jose Pertierra's reports from U.S. District Court in El Paso appear first on the pro-Castro CubaDebate website and are reprinted by CounterPunch and other publications. In his latest dispatch, Pertierra recounts the testimony of FBI informant Gilberto Abascal.
Pertierra has a longtime interest in the Posada Carriles case. He represents the government of Venezuela in its request that Posada Carriles be extradited to Venezuela to face charges there.
Pertierra was born in Cuba, but grew up in the United States. He graduated from Georgetown University in 1979 and was admitted to the District of Columbia Bar on Dec. 7, 1984. His law firm is Pertierra & Toro, at 1010 Vermont Avenue NW in Washington, D.C.
Among notable past clients:
Pertierra's willingness to defend leftist causes has drawn enemies. About a decade ago, someone blew up the lawyer's Honda Acura while he was defending Harbury, according to a 2009 profile in CubaNews. He wasn't in the car at the time.
Interestingly, Pertierra must file disclosure statements under the Foreign Agents Registration Act, or FARA. According to the Justice Department:


FARA is a disclosure statute that requires persons acting as agents of foreign principals in a political or quasi-political capacity to make periodic public disclosure of their relationship with the foreign principal, as well as activities, receipts and disbursements in support of those activities.
Disclosure of the required information facilitates evaluation by the government and the American people of the statements and activities of such persons in light of their function as foreign agents. The FARA Registration Unit of the Counterespionage Section (CES) in the National Security Division (NSD) is responsible for the administration and enforcement of the Act.

The Foreign Lobbying Influence Tracker makes it easy to see statements that Pertierra has filed. See Influence Tracker search result for Pertierra. Here are samples of disclosure statements he made in 2008 and 2009:
CU-455 is a reference to Cubana Flight 455. That's the passenger plane that was bombed in 1976, causing a crash that killed all 73 people aboard.
Venezuelan authorities want to extradite Posada Carriles to face charges in connection with the airline bombing. Posada Carriles, a Cuban national, denies any involvement in the attack.
He's on trial in El Paso for perjury and immigration fraud charges. His lawyer, Arturo Hernandez, has twice asked Judge Kathleen Cardone to declare a mistrial. She denied his latest request on Wednesday.
Pertierra wrote:


Abascal admits that he suffers "from insomnia and depression," and said he locks himself in his home sometimes because I have fear. "'Who are you afraid of?" Posada Carriles' lawyer asked. "Of you, because you've had me under surveillance for six years," lawyer Hernandez told Abascal.

The prosecutor (Jerome Teresinski) quickly stood up to complain that Hernandez was "harassing and bullying the witness with the idea to confuse and obfuscate the jury." Hernandez took the opportunity to ask Judge Kathleen Cardone to declare a mistrial.

It is the second time Hernandez asked the judge to annul the proceedings against Posada Carriles. "It is not appropriate Teresinski accuse me of harassment. The only thing I was doing was asking the witness about his mental health," said Hernandez. "In addition, Abascal's statements portray me unfavorably to the jury."

The lawyer complained not only of the revelation that Abascal threw out this afternoon - that he's been watched for six years - but an earlier statement by Abascal that especially mortified Hernández: "This jury has to understand that you are disguising the truth,"Abascal said.

Judge Cardone looked visibly upset with the disruptions, complaints and motions attorneys. It was notable that the jury was quite disturbed by the delays.

Days earlier, Pertierra wrote about Hernandez' previous request for a mistrial. In a piece called, The Tip of the Iceberg, the lawyer recounted the testimony of Susanna Bolaños:

Then he asked the question Hernández was waiting for, "And what if those concerns were only the tip of the iceberg . . . ?" Teresinski could not finish his question. Hernández shot up from his chair as though catapulted by a spring. He'd been lying in wait for this opportunity. This time, he buttoned his jacket. He settled his glasses comfortably on the tip of his nose so as to look directly at both the judge and the jury, and he announced that he wanted to reserve a motion.

The judge dismissed the jury to a room next door and asked Hernández to explain his concern. "The comment about the tip of the iceberg opens a Pandora's box, a panoply of possibilities so that the jury might infer that my client is a monster," said Hernández, feigning indignation. "Teresinski´s personal diatribe against me is unacceptable... His comment about the tip of the iceberg forces me to demand a mistrial, because the government has hopelessly prejudiced the jury with that statement."

I'm sure that the script Hernández wrote for this trial includes his making multiple motions for a mistrial during the course of the next several days. If granted, a mistrial would force the government to decide if it wants to continue spending money in order to start from zero and try Posada Carriles again for lying. It's expensive and annoying. Posada is 82 years old. He will be 83 on February 15. Hernández plan is to hinder the process so that the prosecution surrenders because a trial is expensive, complicated and time consuming, and "Mister P." – as Hernández called his client in the previous session, characterizing him as the nice old man of Spanish language children's cartoons – is not worth the trouble. It wouldn't be an acquittal but it would end the judicial process against Posada.

However, Judges are reluctant to declare a mistrial, except when the jury has been tainted with prejudice against the accused. "The comment about the tip of the iceberg has tainted this jury," said Hernández. The judge disagreed with him. She recognized that such comments bias the jury in a cumulative way but said that this was an isolated incident. She said that this jury could still, impartially, render a fair verdict.