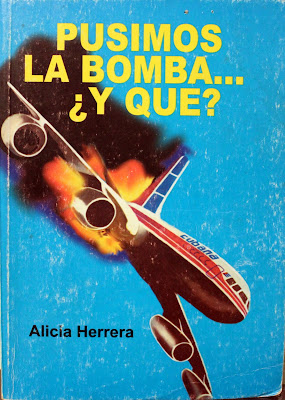 From the garage
As the Luis Posada Carriles trial gets underway, I've been digging through boxes in the garage to look for material.
I found a 2000 edition of the book, "¿Pusimos la bomba... y que?" first published in 1981. The author, Venezuelan journalist Alicia Herrera, interviewed Orlando Bosch and other anti-Castro militants while they were in jail in Venezuela. She claims that they admitted carrying out the 1976 bombing of a Cubana plane that killed all 73 people aboard.
While at the prison, Herrera met with Bosch, along with Venezuelans Hernan Ricardo Lozano and Freddy Lugo, who were charged with placing plastic explosives on Flight 455.
Herrera recently told a Cuban radio station how the first confession came about:


Freddy tells me that while he, Bosch and Hernan Ricardo were in the patio of the San Carlos Prison, where they would go to exercise or get some sun, they would argue. They had strongly discussed the issue of the plane and in a state fury Hernan Ricardo screamed in front of the soldiers and officials: We Placed the Bomb and So What?

That's where she got the title for her book: "We planted the bomb... and so what?"
In his memoirs, Posada Carriles said he warned Bosch not to talk to Herrera because he believed she was connected to a Cuban spy ring. His book reads:


I advised Bosch, but he didn't believe me and says, smiling:
- Luis, you're seeing spies everywhere.
I insist and tell him:
- Orlando, this is serious. At least, if you don't believe me, be very careful.
- I always do that, Bosch replied.