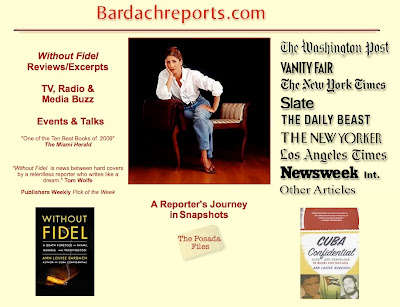 Link: the Posada Files of Ann Louise Bardach
The journalist Ann Louise Bardach prefers facts over fiction, hard data over fuzzy, unproven ideas.
“As a rule, I don't believe in conspiracy theories,” she wrote in a Nov. 12, 2006, story in the Washington Post. “They tend to be tidy and selective, whereas life seems so random and messy.”
So when her Sony Vaio started acting up, she’d didn’t think much of it. But then one of her main email accounts stopped working for a week and icons started disappearing from computer screen, so Bardach decided to get her Vaio checked out.
She knew just the person for the job: A cyber expert who does work for a Defense Department aerospace contractor.
The expert had maintained her computers for years, installing security patches and other tools on the Vaio aimed at keeping intruders out.
He quickly reported a problem: Someone – or something - had stripped away her Sony computer’s security patches and blocked installation of future security patches.
Not only that, an emergency back-up in the computer – an archive file – was suddenly gone.

The security expert “was quite alarmed,” she said. “I asked him, ‘How often does something like this happen?’ He said, “Very rarely.”
Bardach, author of the books "After Fidel" and "Cuba Confidential," said the expert told her that the apparent hacking was “a recent operation,” - as he had checked patches last year. She said she doesn’t know who might be to blame, but finds the whole episode to be troubling. She is expected to be called as a witness in the high-profile perjury trial of former CIA operative Luis Posada Carriles. She was the co-author of a series of articles related to the case in the New York Times in 1998.
She said the computer expert told her that someone may have hacked in to her computer to examine and possibly copy or remove files.
Whoever it was, the expert said, sought to cover their tracks. "It was sophisticated," he told her.
Strangely, the URLs to notes published as part of a November 2006 story she wrote for The Atlantic magazine also stopped working recently. That struck her as odd, she said. The magazine's web person looked into it and told her it appeared that the links may not have been updated. They were restored on Feb. 5 (See the links here and here).
Bardach is being compelled to testify in the trial after losing a five-year legal battle waged by the New York Times (Download PDF of subpoena).
"It's already a challenging experience" and it “just became more so" in light of the computer hacking, said Bardach, who now wonders about her personal security while in El Paso.
Her interviews with Posada Carriles are key pieces of evidence in the trial, which continues in U.S. District Court in El Paso this week.
Posted by alongthemalecon at 10:32:00 PM

Gee. What a surprise!