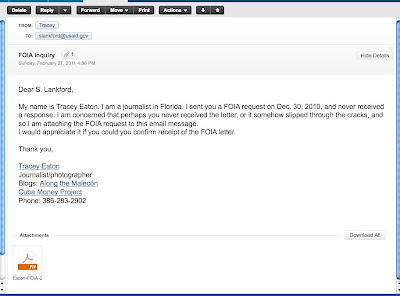 Screenshot of my message to S. Lankford
The U.S. Agency for International Development, or USAID, has not responded to my Dec. 30 Freedom of Information Act request.
So today I sent a note to S. Lankford, leader of the USAID's FOIA team, to try to find out what happened. I find it odd that the agency didn't respond at all. Perhaps my letter was lost.
I am seeking information about companies that submitted bids in response to USAID's May 2008 solicitation linked to the Cuba Democracy and Contingency Planning Program.
The USAID contract was worth up to $30 million. Development Alternatives Inc., or DAI, ultimately won the contract, and later hired Alan Gross.

Gross was arrested in Havana in December 2010. Cuban authorities have since accused him of carrying out unspecified acts against the socialist government.
He faces up to 20 years in jail. His trial begins March 4.
I'll post updates on my efforts to obtain information here and on the Cuba Money Project website.
By law, U.S. government agencies are supposed to respond to FOIA requests within 20 business days. That doesn't mean they have to provide any documents within 20 days, but they are supposed to respond and assign a case number to the request.
If anyone has any tips for encouraging USAID's FOIA team to respond, please let me know.
In addition to writing S. Lankford at slankford@usaid.gov, I sent messages to four other USAID FOIA team members, including: