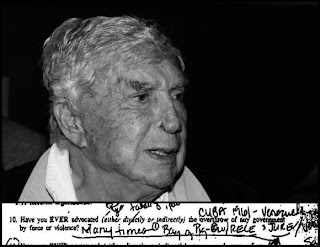 U.S. District Court Judge Kathleen Cardone on Tuesday denied a defense request for a mistrial in the Luis Posada Carriles perjury trial in El Paso.
Cardone ordered prosecutors to disclose records, if any, showing that Cuban witness Roberto Hernandez Caballero has fabricated evidence.
Hernandez, a Cuban state security official, traveled from Havana to El Paso for the trial. He is testifying that Posada Carriles helped plan a string of bombings at Havana hotels in 1997.
An Italian tourist was killed in the bombings.
Electronic court records on Tuesday did not show any documents explaining Cardone's ruling in detail.
The judge's order read:


Government is ORDERED to provide all Brady and impeachment evidence relating to the Cuban documents and to the witness Roberto Hernandez Caballero, including ALL instances, if any, in which it is known to the government that witness Hernandez Caballero falsified evidence, documents or testimony. Entered by Judge Kathleen Cardone. (This is a text-only entry generated by the court. There is no document associated with this entry.) (KC) (Entered: 02/22/2011)