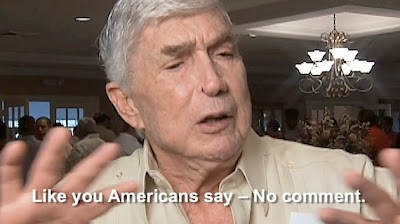 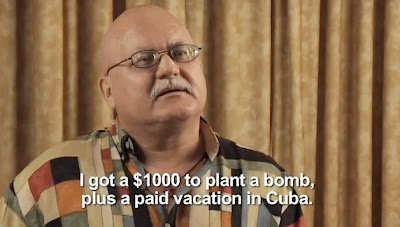 Screenshots from trailer of "Will the Real Terrorists Please Stand Up?"
California filmmaker Saul Landau's new documentary, "Will the Real Terrorist Please Stand Up," contains a diverse cast of characters from both sides of the Florida Straits.
It's a real Who's Who of key figures in the more than half-century-long grudge match over Cuba. I'll list some of the characters here to give you an idea.
But first, here are some of my favorite lines from the documentary:
"Will the Real Terrorist Please Stand Up" debuted on Dec. 11, 2010, at the Havana International Festival of Latin American Film. That version of the film had Spanish subtitles.
A showing of the documentary with English subtitles is scheduled for March 10 at the University of California at Berkeley Journalism School. See 16-minute trailer here.
I previewed a Feb. 7 cut of the film with English subtitles. The 81-minute documentary includes mostly original interviews, along with some archival footage and interviews with some people who are no longer alive. There is video from the 40th anniversary of the Bay of Pigs reunion in Cuba in April 2001 that I haven't seen anywhere else.
The film opens with actor Danny Glover standing in a parking lot and asking Americans what they know about the case of the Cuban Five. People don't know much, it turns out. "Is that a salsa band?" one woman asks. No, it's a rock band, another person said. Still another thought the Cuban Five were semi-finalists in the Pan American Games.
Some of the other characters appearing in the documentary include:
The film will be distributed by Cinema Libre Studio. For more information contact saul.landau.films@gmail.
Posted by alongthemalecon at 9:30:00 AM

Email ThisBlogThis!Share to TwitterShare to FacebookShare to Pinterest
Labels: along the malecon blog, will the real terrorist please stand up