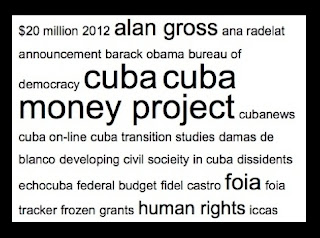 Cuba Money
In Cuba, the case against Alan Gross is black and white. He went to the island with fancy satellite gear as part of a broader U.S.-government-financed effort to undermine the socialist regime.
But in the United States, the pro-democracy programs that sent Gross to Cuba are not at all black and white. They are complicated, somewhat mysterious programs, charged with politics and tainted with shades of grays.
Here are 10 reasons why the U.S.-funded Cuba programs are intriguing and controversial:
Note to readers: In 2010, I began researching U.S. pro-democracy programs in Cuba with the help of the non-profit Pulitzer Center. My project page is called, "Cuba: The Battle for Hearts and Minds." Please send me your news tips and story ideas. I welcome essays and opinions from people involved in or interested in pro-democracy programs, no matter what their point of view. I will post opinions and links here and on the Cuba Money Project website.
Posted by alongthemalecon at 7:00:00 AM

thanks!
but I know I'm only scratching the surface.
poco a poco

This is an excellent beginning of serious reconsideration of the $20 million dollar boondoggle that is USAID democracy funding. However, I was concerned by the last point about evolving. You write, “a goal of those trying to reform USAID programs is to steer some of the contracts to NGOs instead of private contractors. Pro-democracy work isn't a business for NGOs, the source said. It's their passion”

This will only compound the problem and further poison the well for serious US NGO work in Cuba. US NGOs played an important role in the improvement of US relations with postwar Vietnam, Laos and Cambodia. The initial presence was of groups that worked in those countries during the American war and had been opposed to it. They entered post-war Indochina with a critical stance about ongoing US embargos and refusal to normalize relations or provide reconstruction assistance.

The base broadened during the Reagan and original Bush administrations, as more centrist NGOs carried out humanitarian programs with US government funding. The crucial step was that the US accepted the legitimacy of all three governments years prior to diplomatic normalization and there was not a hint of an effort to “democratize” or replace them.

There is little US NGO presence in Cuba, even of progressive organizations. The Cubans are distrustful because of language in Helms-Burton seeking to make US NGOs one more weapon against them. The NGOs face daunting obstacles to licensing by the Commerce and Treasury Departments, with no improvement by the Obama administration.

As with travel, the best thing the Obama Administration can do is simply get out of the way and end restrictions so that normal NGO activity can find its own path and Cuban partners.

When I first returned to Cuba in the late 1990s European and Canadian NGOs had a small presence. They were not allowed to have resident staff in the country and their sponsor was the Center for European Studies. Currently there are 20 staffed NGO offices in Cuba and their sponsor is the ministry responsible for coordinating international aid.

If USAID wants to put its twenty million dollars to work productively, it must recognize that the most effective way to contribute to democratization of Cuba is to foster the development of officially sanctioned cooperatives and the self-employed. It must follow the example of Canada and the Europeans and take a leaf out of its programs in Vietnam by pre-clearing all programs with the host government. It should explore partnership with nationwide grass roots based organizations like the Women’s Federation and the Association of Small Farmers.

Anything else is simply a new way to waste money and provoke tension.

Thanks for your comments, John. I am seeking documents under the Freedom of Information Act to try to get a better idea of just how USAID in Cuba is evolving. I don't know for a fact that some contract jobs have shifted to NGOs, just that one official told me that was a goal. I'll post more information as soon as I have it. Thanks again for your comments. Tracey