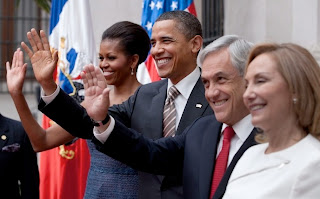 
Let’s never waver in our support for the rights of people to determine their own future — and, yes, that includes the people of Cuba. Since taking office, I’ve announced the most significant changes to my nation’s policy towards Cuba in decades. I’ve made it possible for Cuban Americans to visit and support their families in Cuba. We’re allowing Americans to send remittances that bring some economic hope for people across Cuba, as well as more independence from Cuban authorities.

Going forward, we’ll continue to seek ways to increase the independence of the Cuban people, who I believe are entitled to the same freedom and liberty as everyone else in this hemisphere. I will make this effort to try to break out of this history that’s now lasted for longer than I’ve been alive.

Full transcript
Fidel Castro's response is here, in Spanish.
Posted by alongthemalecon at 6:22:00 AM