Cuba: Only nation where U.S. bans mingling with locals 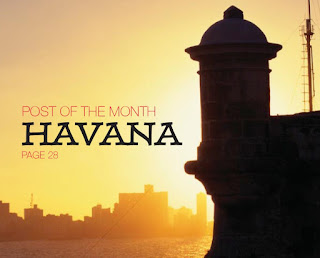 Photo credit: State Magazine
Havana was listed as "Post of the Month" in the October 2007 issue of the State Department's monthly magazine.
Foreign Service officers give their vision of Havana, which is timely in light of a Feb. 27 incident in which pro-Castro supporters harassed and insulted American diplomat Lowell Dale Lawton after he showed up to watch an anti-government demonstration (See YouTube video).
The authors of the State Magazine stories are identified as Ramón Negrón and John Vance. They say living conditions in Cuba are difficult, but point out that Foreign Service officers who work out of the U.S. Interests Section, or USINT, often ask to extend their stay.
Some foreign journalists also complain about Cuba. A Cuban diplomat once told me he didn't understand that, saying that journalists always have their gripes, but they don't want to leave the island.
No doubt, American diplomats in Cuba have a tougher time than most journalists. When I was in Havana in November 2010, a Foreign Service officer told me that Cuba is the only country in the world where U.S. diplomats are not allowed to fraternize with local residents.
Negrón and Vance mention that fact, writing:


Being a U.S. diplomat in Havana has long meant living under difficult circumstances. Listening devices in all USINT spaces, vehicles and homes mean one can never escape Cuban government scrutiny. The pervasive intelligence-gathering effort directed at USINT has garnered Havana the dubious honor of being the U.S. government’s sole nonfraternization post.

Download State Magazine's entire October 2007 issue (52-pages, 3.7 MB). Or see below for excerpts from the magazine's two stories about Cuba:


While the wider world has outgrown communism and embraced the free market in the last 20 years, Castro’s regime has stubbornly clung to its tired Cold War doctrine and anti-capitalist rant.

When asked to summarize their experience in Cuba, most diplomats at the U.S. Interests Section use the word “surreal.” They also say it is “fascinating,” “difficult” and “inspiring.” Among the key components of the Cuban government’s longstanding policy to insulate its citizens from the world is its tireless campaign to isolate the 51 resident USINT diplomats and their families from Cuban society.

(Question: Is it entirely fair to blame Cuban authorities for isolating American diplomats when it's the U.S. government that has the strict non-fraternization policy?)

There is no question that a tour of duty in Havana is an experience unlike any other in the Foreign Service.

The increasingly fickle nature of Cuba’s visa issuance procedures makes it impossible to plan arrival schedules of section personnel and visiting family. And in-country travel is restricted to Havana and its environs.

One challenge in Havana is shared by all, regardless of nationality: the paucity of food and shopping. USINT personnel rapidly learn to buy in bulk when desired items appear in stores that cater to expatriates, as that may be their only opportunity.
As the average mark-up on imported items is 240 percent, the exorbitant cost of filling a shopping cart sometimes leaves one wondering which is worse: missing a favorite item or finding it.

Accustomed to mitigating Cuba’s perennial grocery shortage through household and consumables shipments, the USINT community has recently contended with a spate of Cuban government import restrictions. Some are reciprocal, while others seem almost random. Cuban authorities currently hold 28 USINT shipments in local ports. Some have been in limbo for more than 18 months.

Despite the undeniable hardships and frustrations, many Foreign Service families
extend their tours in Havana. Although government-to-government relations are
chilly, the Cuban people are friendly and generally like Americans.

The quality of the elementary education programs at the International, Spanish and French schools is an attraction, as is the excellent prospect for spousal employment at USINT.

The Cuban government’s draconian policies toward USINT personnel have produced a tightly knit community with frequent social activities. Also, Havana is a safe city in which to live. Although much crime goes unreported, the incidence of residential break-ins is exceedingly low in areas where USINT personnel live.

Finally, while sadly complicating the plight of habaneros, the frozen-in-time
quality of Havana makes it a unique and photogenic city. From its Spanish colonial
architecture to its quality cultural events and vibrant musical heritage, Havana
readily shares its treasures with the visitor.

For those exploring its narrow passages on foot, Havana’s rich culture is on display at every corner. The exclamations of men shuffling dominoes on rickety tables, the
laughter of women chatting in shadowed doorways and the shouts of children playing baseball with makeshift bats compete for one’s attention while the ever present salsa music brings rhythm to the cacophony.


USINT implements the Office of Cuban Affairs-led effort to hasten a peaceful Cuban-led transition to democracy and a free-market economy. USINT personnel:
For Cubans, interaction with USINT officials can bring unwanted attention from an omnipresent state security apparatus dedicated to squelching all potential opposition.

The fact that Cuba’s Interior Ministry is larger than its Defense Ministry is illustrative: The regime devotes more resources to defending itself from its own people than from foreign threats. In addition to the risk of becoming political prisoners, opponents of the regime are denied jobs and are constantly harassed.

“The reality of living in a communist country hit me,” a USINT consular officer said, “when I discovered my maid left her job as vice president of a large, state-run enterprise to iron our shirts and take care of our plants.”