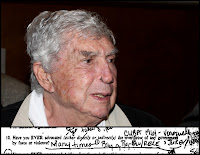 Ann Louise Bardach, a key witness in the perjury trial of Luis Posada Carriles, said jurors who acquitted the defendant today was not allowed to hear her entire interview with the anti-Castro militant or read articles she wrote about him.
Bardach said in a statement:


I have no opinion regarding how the jury should decide this case.
My job - and that of co-author Larry Rohter, and the editors at the New York Times - was to accurately report what we learned from Luis Posada Carriles in June 1998. And we did that.
Indeed, the Times vigorously fought this intrusion of the First Amendment for five years.
My own concerns regard the First Amendment, the vital role of the press as the Fourth Estate, and the protection of sources. That would include Mr. Posada, regardless of his guilt or innocence.
Regrettably, the courts overruled our objections and forced my testimony to authenticate redacted portions (less than half) of the tape-recorded interview of Mr. Posada, relating to three of the eleven counts. However, the Court did not allow the jury to hear the entire taped interview, or to read the actual articles published in the Times or to read either of the two books I later wrote using the Posada interview. The jury also did not have any of the notes or the scores of other interviews used in the Times series. Therefore, the jury’s verdict, whatever it might be, would have no correlation to the Times' articles.
I hope that this case will prove to be an aberration and that no other reporter need ever undergo this ordeal- which in my case lasted six days.
Although Mr. Posada was not a confidential source, dragging reporters into court sets a dangerous precedent.