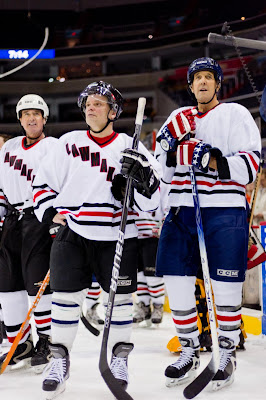 Sen. John Kerry, above right, in a hockey uniform, evidently ready to body check USAID in Cuba
During the Cuba Futures conference in New York on Friday, a Miami journalist asked me if it is ever OK for the U.S. government to send satellite phones to Cuba.
I said breaking through the information blockade in Cuba is U.S. policy, but I am not going to take a position on it.
Reporter Frances Robles later told me that was a "lame answer."
Maybe so, I told her. But my goal is to research and write about U.S. programs in Cuba, not take sides. I want to collect points of view from all sides, including both U.S. and Cuban officials, private contractors, democracy advocates, critics and more.
I was on a panel called "Digital Dilemmas: The Internet and Blogs in Cuba Today." I said it is a just cause to try to expand basic freedoms anywhere, including Cuba. There's no question about that.
But I said think it's worth examining U.S. policy. I recalled something British diplomat Paul Hare wrote - the idea of giving public diplomacy a shot. The U.S. government hasn't tried that, Hare wrote. Instead, U.S. officials have always tried to impose their will on Cuba.
I suggested that perhaps at least some of the millions of dollars that go to democracy programs might be used to explore ways to make peace with Cuba. And I brought up President Jimmy Cart's approach, which Phil Peters described Carter's approach like this:


to engage directly with top Cuban officials and at the same time to advocate for human rights.

Peters, a former State Department official, writes the Cuban Triangle blog. He reported an important piece of news on Friday: Sen. John Kerry is calling for a review of USAID democracy programs in Cuba (See Kerry's statement).
Kerry's announcement drew sharp criticism from Mauricio Claver-Carone, editor of the Capitol Hill Cubans blog.
I am going to try to find out more about what Kerry's announcement means for USAID programs in Cuba. I'll post any information here and on the Cuba Money Project.
The Cuba Futures conference ends today.
Posted by alongthemalecon at 8:19:00 AM