Mayor-elect Jim Cason: "I am grateful to all my Cuban friends" 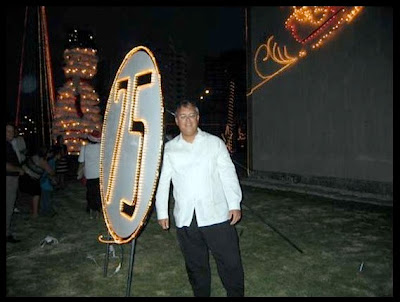 Jim Cason poses next to Christmas lights at the U.S. Interests Section in Havana in 2005. The number 75 called attention to the 2003 jailing of 75 dissidents, journalists and democracy advocates.
Jim Cason, former chief of the U.S. Interests Section in Havana, beat two City Hall insiders to become mayor of Coral Gables.
The Miami Herald, which did not endorse Cason, reported that the retired diplomat was elected over incumbent Don Slesnick and Planning and Zoning Board chair Thomas Korge.

Cason, a fierce critic of Fidel Castro, had the support of many Cuban-Americans in South Florida, Cafe Fuerte reported.
Cafe Fuerte quoted Cason as saying:


I am grateful to all my Cuban friends, but also to all the voters. I will be a mayor dedicated full time to my job and will do everything possile to improve this city, where I plan to live for the rest of my life. 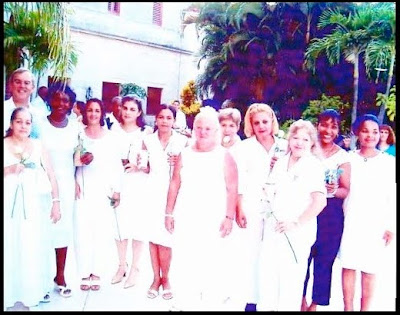 Cason, at left, poses with the Damas de Blanco in Cuba.
Source of photos: Cason for Mayor candidate photos
Posted by alongthemalecon at 6:30:00 AM

Remind me to stay out of Coral Gables.

He was a complete embarrASSment and was not an ambassador at all.

Thanks for your comment, Rob. I respect your opinion, of course.
I have a different take on Jim Cason. He was always very professional when I interviewed or spoke to him in Havana.
I know that some people don't agree with the aggressive approach he took in Cuba, but he has decades of experience in management and finance. He has language and cross-cultural skills that will help him in South Florida. He has political skills, whether you agree with his politics or not. And he has shown that he is creative.
It's impossible to know just how things will work out for him in Coral Gables, but my guess is that he'll probably be a good mayor.

Tracey, I am really surprised on your viewpoint. James Cason is a complete idiot who tried to start a civil war in Cuba. He is no diplomat but a disgusting piece of s--t! Only in a banana republic like Miami and its suburbs would a scumbag like that be elected mayor! He does not even deserve to be head of a sanitation crew.

curt9954 - I appreciate your comment, your wit and the passion you have for this topic. I'll be the first to say that maybe I'm wrong. But to be clear, I am not judging Cason for the policies he carried out while in Cuba. What he did in Cuba was controversial, I know. But I think he has managerial skills and experience that will make him an effective mayor. That's all I'm saying.

I am quite disappointed, Tracey, that you are such a strong supporter of Jim Cason. He was an uncouth bully during his time in Cuba, an embarrassment to decency and to America. The expensive electronic billboard he put across the 5th floor of the U. S. Interests Section demeaned innocent Cubans, such as making fun of their love of baseball by teasing them about the success of their superstars who had defected to the U. S. He is typical of the self-serving legions who have leeched onto the radical Cuban exile agenda, showing zero respect for the innocent Cubans on the island. Such bullying gets him a mayoral job in South Florida. Par for the course!

Well, it takes all kinds, I guess. If we all agreed on everything, the world would be a pretty boring place...

I try to be tolerant of all views, whether far left or far right. But I've noticed there is a tendency to demonize people on both sides. Then it becomes unacceptable in some quarters to consider the complexities or many-layered dimensions of someone's work or history. Instead, everything is black and white. I don't think that contributes toward improved U.S.-Cuba relations, which is something I advocate.

Well said, Tracey, but I believe most of the commenters also want improved relations between the U.S. and Cuba. However, the biggest hindrances to that remains the continuing waves of generational financial and political benefactors demonizing innocent Cubans in the guise of being anti-Castro, anti-communism, anti-dictatorship, etc., etc. The Diaz-Balarts and Ros-Lehtinens represent both generations while Jim Cason, Roger Noriega, Otto Reich, etc., etc., represent the latest generation. Instead of demonizing people, I think that's identifying demons. However, I'll remove any of the above from my demons' list if they merely admit that the terrorist bombing of the Cuban plane on 10-6-76 actually happened and was wrong.