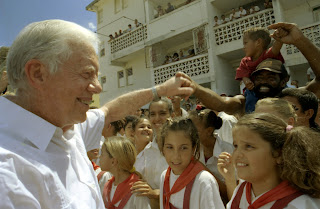 Jimmy Carter in Cuba in 2002. Photo: Annemarie Poyo/The Carter Center
Cuban writer Carlos Alberto Montaner doesn't believe Jimmy Carter's trip to Cuba will cause the Obama administration to change its stance toward Cuba. In an April 2 article in the Miami Herald, he wrote:


The general perception in Washington, judging from the WikiLeaks, is that the Cuban regime is in a final phase of demoralization and erosion, and it makes no sense to do anything that halts or reverses that trend. Corruption is rampant, the children of many leaders are leaving the country discreetly and the state of mind that prevails among the mid-level cadres is that of an end-of-regime. Raúl is not unaware of this but has no way to prevent it, as long as he insists in maintaining a one-party collectivist regime that demands total obedience.


Jimmy Carter went to visit Raúl Castro. The initiative was Raúl’s. He wanted to let President Obama know that everything is negotiable, including the release of Alan Gross, an American sentenced on the island to 15 years’ imprisonment for handing out computers and communications equipment so that uninformed Cubans might have access to the Internet. For the moment, he has not freed Gross, but that will happen. It’s a matter of time.

Frank Calzon, director of the Center for a Free Cuba, said on Monday he agrees with much of what Montaner wrote, but doesn't believe Gross's release is imminent.
Calzon also commented on Sen. John Kerry's call for a review of USAID programs in Cuba.
In an email to Montaner, Calzon wrote:


Carlos,
A lot of merit in your analysis. But keep in mind that Gross has lost 88 pounds already.
Also the Carter Center has released a trip report which I’ve been told is an outrage.
Also there is nothing unusual about Kerry’s hold. I am not sure it can be called a “legal” obstacle. Holds are placed all the time on the Hill and they are sometimes simply a way of harassment, or getting additional information, or getting something in return by a Congressional office. I bet the hold will be lifted before Gross comes home.
Carter’s visit also had something to do with the regime’s need to show the Cubans that the Revolution still matters, that it has important friends abroad who support its anti embargo campaign, and its free the five spies campaign. Raul want the Cubans to think about Carter, the spies, whatever and not about how tough things continue to get in Cuba.
Obama, the Congress, the American people have too many other very important issues on their plate. Carter is seen in many quarters as old, somewhat irrelevant and out of touch. If he had any real influence with Obama he would not waste his time, and get his nose into an issue that Obama mentioned very recently (Cuba in his speech in Santiago de Chile). Some Americans do not appreciate a former president criticizing American policy while traveling abroad and specially while visiting a regime hostile to their country. Despite what some say, Obama is not Carter. Just a few days ago Havana’s TV blasted Hillary Clinton and took great exception to Obama’s responding to the questions Yoani sent to him.
As every day and every week gets us closer to the 2012 elections the possibility of Obama making unilateral concessions. Even if he wanted to, and there are many indications that he does not want, becomes less and less.
Do not pay too much attention to what some say in Miami or elsewhere even if they are former CIA analysts or successful businessmen just back from Varadero.
Frank