U.S. lawmakers this week are wrangling over federal government finances. Past budgets contain oddities like this one:
The U.S. Interests Section in Havana paid a New York snowplowing company $97,185, but it wasn't to clear the streets.
U.S. officials hired D&M Snowplowing and Sanding Inc. to buy uniforms, a task that has nothing to do with the company's usual duties.
Federal budget documents don't explain the unusual transaction. The company's phone number - (315) 764-1377 - rang through to a machine tonight.
Records show two State Department transactions:
D&M Snowplowing, which shows an address of 11 Bowers Street in Massena, N.Y., has also received government contracts for snow removal (the timeline below shows the contracts).


The company received the uniform contracts under the federal government's Simplified Acquisition Procedures, or SAP. The threshold for such purchases is usually $100,000, but can rise to $5 million or higher under certain circumstances.
The Division of Corporations, State Records and Uniform Commercial Code in New York does not list a company called D&M Snowplowing and Sanding Inc.
Google Maps show what looks like a residential home at the company address, not that there's anything necessarily amiss. 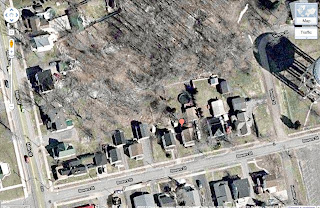