U.S. gov't vows most of $20 million will reach Cuba 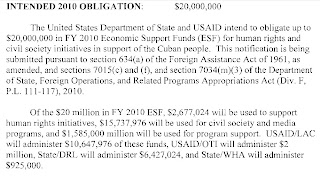 Phil Peters at the Cuban Triangle obtained a March 31 memo showing how the State Department plans to spend $20 million that was set aside for Cuba programs in fiscal 2010. Peters, vice president of a Washington research organization called the Lexington Institute, writes:


The funds will be administered mainly by USAID, including by its Office of Transition Initiatives ($12.6 million total), while $7.3 million goes to the State Department. $2 million is to be transferred to the National Endowment for Democracy.
These funds were appropriated for fiscal year 2010, which ended six months ago.
Some grantees are identified, others are listed as “to be determined.”


State and USAID will ensure these funds are allocated to recipients on a competitive basis and reach a broad representation of Cuban civil society; that as few funds as possible are spent outside of Cuba; and that funds support the activities of Cubansd on the island who are working for the advancement of democracy and human rights.