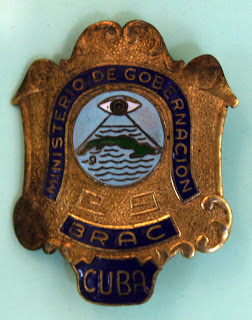 A BRAC badge on display in a Havana museum
BRAC stands for Buró de Represión de Actividades Comunistas or Bureau for the Repression of Communist Activities.
The agency fought against supporters of Fidel Castro in the 1950s.

May 23 update: Pedro Pablo Bilbao provides useful context and background about BRAC in a post on Emilio Ichikawa's website. He wrote:

There's no reason to single out BRAC as an anti-Castro force, Bilbao wrote. He said:


By contrast, Marilu Uralde Cancio points out that the BRAC had its "priority levels within the opposition: first the Communists, against which it carried out thousands of investigations and blamed for any strike or sign of protest, second, the 'Authentic Party,' whether or abstainers or insurrectionaries, and finally, the Orthodox Party."

Gee! We Fidelistas don't have the BRAC to kick around any more. It is in the garbage can of history, and so is Fulgencio!