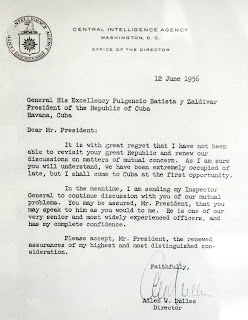 Allen Dulles visited Cuba in April 1955 and "complained about the danger posed by the Cuban communists."
Dulles headed the CIA from 1953 to 1961. He considered Fulgencio Batista, then president of Cuba, to be an ally in the fight against communism.
Below is a letter Dulles wrote to Batista on June 12, 1956:

It is with great regret that I have not been able to revisit your great Republic and renew our discussions on matters of mutual concern. As I am sure you will understand, we have been extremely occupied of late, but I shall come to Cuba at the first opportunity.
In the meantime, I am sending my Inspector General to continue discussion with you of our mutual problems. You may be assured, Mr. President, that you may speak to him as you would to me. He is one of our very senior and most widely experienced officers, and has my complete confidence.
Please accept, Mr. President, the renewed assurances of my highest and most distinguished consideration.

The inspector general Dulles was referring to was Lyman B. Kirkpatrick Jr., who visited Cuba in 1956 and at least one more time - in 1958 - when he reportedly told Batista it was time for him to step down.
Kirkpatrick died in 1995 at age 77. His obituary in the New York Times said:


As inspector general, he had the job of investigating some internal agency actions that were criticized years later, including the failed Bay of Pigs invasion of Cuba in 1961.

In 1953, for example, he investigated the death of Frank R. Olson, an Army biochemist who died while using L.S.D. in an agency experiment. Mr. Olson plunged to his death from the Hotel Statler in New York on Nov. 28, 1953. The C.I.A. hid the truth about his death and his involvement in the drug experiment from his family until 1975, when it was disclosed in news reports.

Mr. Kirkpatrick never testified publicly about the Olson case, but he reportedly recommended that the agency employees who gave Mr. Olson the drug be disciplined. They were not.

Source of Dulles illustration: Wikipedia
Posted by alongthemalecon at 10:35:00 PM

Your euphemistic sentence regarding Allen Dulles -- "He considered Fulgencio Batista, then president of Cuba, to be an ally in the fight against communism" -- distorts the article a bit. As CIA director Dulles knew that Batista had twice reinstated the communist party in Cuba and the Batista dictatorship included many hardline Moscow-trained communists such as Rolando Masferrer who was Batista's main killer/enforcer as head of the infamous "Los Tigres." Like his older brother, Ike's famed Secretary of State John Foster Dulles, Allen Dulles was closely tied financially to U. S. companies such as the United Fruit Company that shamefully raped and robbed helpless countries, including Cuba, from the 1950s into the 1980s. So the Dulles brothers, in the guise of "fighting communism," were primarily concerned with lining their bank accounts. Any Wikipedia or historical account of the Dulles brothers will detail their roles in overthrowing democratically elected governments such as Prime Minister Mossadegh in Iran and President Arbenz in Guatemale AND THEN INSTALLING PRO-US killer dictatorships. This led to Iran's radical Islamic revolution, of course, and the Arbenz coup was among the first to foreshadow right-wing U. S. governments strongly preferring friendly dictators to democratic governments because capitalists like the Dulles brothers were far better off having dictators to deal with as opposed to democracies that tended to reserve at least some of its resources for its own people. Also the Allen Dulles you mention was instrumental in creating Operation 40, one of history's all-time most infamous murdering machines. In the Wikipedia bio of Allen Dulles his preference for dictators instead of democracies is detailed, as is his key role in creating Operation 40. Wikipedia's last sentence regarding Dulles and Operation 40 is: "George H. W. Bush was a fund raiser and eventually a recruiter for Operation 40." One of the most famed members of Operation 40, Porter Goss, was shamefully named CIA director by George W. Bush. To mention the Dulles brothers or the Bushes, one should also mention Mossadegh, Arbenz, Rolando Masferrer, Operation 40, etc., so, at least, those topics can be researched (googled) to coincide with the usual careflly polished public images of rich and powerful men. If the media does not have the guts to, for example, associate Allen Dulles with the United Fruit Company and Operation 40, uninformed citizens are more likely to google Lady Gaga than Operation 40. And that's not good for a democracy.

Thanks for your comment, Rich. I didn't realize Rolando Masferrer was a member of the Communist Party.

Tracey, the very first sentence of Rolando Masferrer's bio on Wikipedia describes him as "a member of the Cuban Communist Party." This, of course, was no problem for those raping and robbing Cuba during the Batista dictatorship or for those in South Florida when the exiled Masferrer established two "Los Tigres" groups to carry out terrorism against Cuba and the Cuban exiles he extorted money from. How much of a killer was Masferrer's 3,000-man "Los Tigres" in support of Batista in Cuba? Tete Puebla, the legendary guerrilla fighter as a teenager and now a general in the Cuban army, says in her U. S. - published biography that her inspiration to fight Batista was spawned when she saw the "Los Tigres" come to her Oriente province village and burn innocents, including relatives, alive in gas-soaked sheds and gunny sacks. Masferrer was just as gruesome operating out of South Florida to recapture Cuba. He, Jorge Mas Canosa, and Rafael Diaz-Balart all competed in South Florida to be the leader of a recaptured Cuba. Masferrer lost to the much richer and more U. S. - backed Mas Canosa and Diaz-Balart; on Oct. 31-1975 Masferrer died in a car-bombing. The FBI attributed the murder to associates of Mas Canosa, not Diaz-Balart. Mas Canosa, close ally of Reagan's VP George H. W. Bush, founded the ultra powerful Cuban American National Foundation, became a billionaire,and totally led the Cuban government in exile but not on the island. Masferrer, the hard-nosed, Moscow-trained Communist, is an example that money and power always superceded all other motives when it came to who ruled Cuba or South Florida. Masferrer's being a Communist didn't hurt him with Batista, the U. S. government or the exiles in South Florida. But his extreme reputation that included murder and extortion, and the competition from Mas Canosa, did him in.