Hillary Clinton: "We could do more" but... 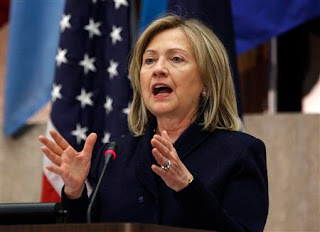 Hillary Clinton: Washington is waiting for a democratic opening in Cuba. Photo credit: REUTERS/Kevin Lamarque
Hillary Clinton said Wednesday that the United States has boosted people-to-people connections with Cuba and "could do more" if only Cuba gave American officials "an opportunity to do so."
Clinton's remarks at the 41st Washington Conference on the Americas are below:


Now, we’re putting a particular focus on people-to-people connections in Cuba. From the very beginning, the Obama Administration believed that the best way to advance fundamental rights in Cuba – in fact, to advance them anywhere – is to support exchanges and constructive relationships. And there’s no better ambassador for our values than a teacher or an artist or a student or a religious leader, a Cuban American who has made a new life in the United States. That’s why we have eased our restrictions on travel and remittances to Cuba.
We could do more if we saw evidence that there was an opportunity to do so coming from the Cuban side because we want to foster these deeper connections and we want to work for the time when Cuba will enjoy its own transition to democracy, when it can look at its neighbors throughout the hemisphere and the people in Cuba will feel that they, too, are having a chance to choose their leaders, choose their professions, create their businesses, and generally take advantage of what has been a tremendous, great sweep of progress everywhere but Cuba.

What Hillary and Obama want is a return to "Batista Democracy." I am very sure that the Cuban people will say: NO THANKS!