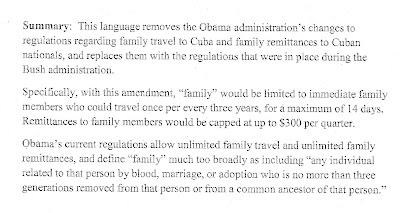 Here's another take on the proposed amendment - a joint statement by the Latin America Working Group and the Washington Office on Latin America:


Today the House Appropriations Committee voted in favor of an amendment to—once again—divide Cuban-American families from their relatives in Cuba.

The amendment was offered by Representative Mario Diaz-Balart (R-FL) to the FY 2012 Financial Services Appropriations bill. It directly repeals the announcement made by President Obama early in his administration to allow unlimited family travel and remittances for Cuban Americans, which delivered on a campaign promise.

If the amendment passed today becomes law, it would affect all of the Cuban Americans that traveled to Cuba in the past year—an estimated 400,000 according to travel services providers. This would move the policy regulating Cuban-American travel back to the harshest years of the Bush Administration, which were enacted in June 2004 and were in place until the Obama announcement in April 2009. Cuban Americans would only be permitted to visit their families in Cuba once every three years, with a limited definition of what constitutes family, and no humanitarian exceptions. Remittances would also be limited, upon which many Cubans on the island depend to survive under the serious economic hardship the country faces.

“Today we saw a member of Congress abuse his seat of power by attaching a vindictive amendment to a must-pass bill,” said Ashley Morse, Program Officer at WOLA.


WOLA and LAWG believe it is a fundamental right for Cuban Americans to be able visit their families as often as they wish. The amendment passed today is anti-family, and if it were to become law it would be a major setback for the United States’ policy toward the island. “We were reminded of the painful testimony we commonly heard when President Bush limited Cuban-American family travel. Imagine, if you visited an ailing parent on the island and then your government wouldn’t allow you to return for the funeral because you’d already used your one trip,” said LAWG Senior Associate Mavis Anderson.

The FY 2012 Financial Services Appropriations bill will face further legislative battles before it can become law, including a vote on the House floor and a new Senate version which will likely have to be reconciled with the House bill. “It wouldn’t be surprising to see the Administration strongly, but quietly, urging the Senate to kill this amendment,” said Geoff Thale, Program Director at WOLA. “This is a direct attack on President Obama’s Cuba policy and will undo the modest but positive inroads he’s made in improving relations with Cuba.”

The amendment, which can be seen by clicking here, did not touch the people-to-people provisions that were announced by the President in January that also allow for general licenses for academic and religious organizations.