How far along is Cuba's transition? 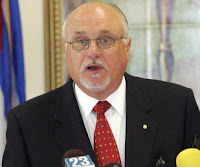 Cuba has a long way to go before becoming a prosperous, democratic nation, Cuban-American entrepreneur Carlos Saladrigas said.
If the democratic transition were the alphabet, "I think we're in C or D, not anywhere near Z," he said the other night on Oscar Haza's A Mano Limipa show, broadcast live on Miami's Channel 41.
Saladrigas co-chairs the Cuba Study Project, which is aimed at promoting "a peaceful reunification of the Cuban nation leading to a free and open society with respect for human rights, the rule of law and a market-based economy."
He was discussing Cuba's transition in light of a May 30 YouTube video showing a recent human rights march in Guantanamo. The video had gotten more than 12,000 hits by this afternoon, triggering comments such as this one:


Freedom is closer every second. 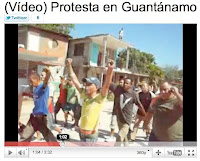 Haza's program got me thinking. If a Gladioli Revolution is underway in Cuba, what stage is it in?
Yoani Sanchez told me in 2010 that she thought it was happening, but she was too close to the epicenter to see the big picture clearly.
Dissidents have been trying to bring change to Cuba for decades.
In April, international Internet activists evidently gathered at the {think} Cuba summit in Panama to talk about ways to jump start the process of change in Cuba. Summit organizer Stephanie Rudat wrote about her admiration for Gene Sharp, author of "From Dictatorship to Democracy."
Sharp's guide to non-violent revolution describes how people can transform their governments. I skimmed through the publication to see if it might offer clues about Cuba.
Sharp writes that grassroots revolutions can happen in weeks, months or years, but it's difficult to sketch out a timetable for any given nation.
Even so, the political opposition can cause serious disruption to the status quo using non-violent techniques, he writes.
These methods include:
According to Sharp:

Cuba has defied predictions for decades, so I won't make any forecasts. But I will offer a few off-the-cuff observations in light of Sharp's guide:

There is disagreement over how many people in Cuba support the socialist government. It seems clear the government still has strength of mobilization, and can control the streets.
The government may be cash-strapped, but it still has resources, institutions, the means of communication and transportation, and the ability to punish law breakers.
How the police handle dissent in Cuba is crucial. The more force the police use, the less support they will have from the people.
If it's a battle of force, the government will win. Non-violence is much more difficult to handle.
What do you think? Where is Cuba in its evolution? Any thoughts?
Posted by alongthemalecon at 6:47:00 PM

In the U. S., including Along the Malecon, it is socially, politically, and economically correct to provide colossal coverage to anti-Cuban dissidents and benefactors, so this promotion of Saladrigas, Channel 41, Yoani Sanchez, the Sharp book, anti-Cuban YouTube videos is, I guess, par for the course. This, I reckon, is why DeWayne Wickham, USA Today's top columnist, went to Cuba again this week and, in his Tuesday (May 31) column, dared Hillary Clinton to visit Cuba and talk to the islanders before repeatedly putting out convenient falsehoods such as her claiming revolutionary Cuba hasn't instituted major changes and that the vast majority on the island are opposed to the
government. It is convenient, of course, not to promote such fair articles about Cuba as those regularly presented by the respected Wickham or, for that matter, recent articles (about Cubans reacting to recent changes) by the Havana-based bureaus of CNN, NBC, CBS, BBC, and Reuters. That being said, here is my view of "where Cuba is in its evolution": It is in the Raul Castro stopgap between the long Fidel Castro reign and the long upcoming Fidel Castro legacy. Raul turned 80 today (Friday, June 3) and he now and always will be under the shadow of his brother, as are all other Cubans, even everybody's icon Jose Marti. Fidel, closing in on his 85h birthday in August, will leave behind a legacy that will remain the biggest obstacle to foreigners -- including the Mafia, the Batistianos in Florida and Union City,and the U. S. from recapturing the island. I am not pro-Castro but I am pro-history and pro-reality.

Thanks for your comments, Rich