How involved should U.S. be in Cuba's democracy movement?

The images here show members of Las Damas de Blanco after a Sunday march in Havana in July 2010.
Kathleen Duffy, an employee of the U.S. Interests Section, showed up that day to support Las Damas. A 3-minute video on the Cuba Money Project's Vimeo channel shows Las Damas members chanting, "Liberty! Liberty! Liberty!" Afterward, they gather briefly in a nearby park, where Duffy greets and chats with the protesters.
Cuba's Catholic Church had just announced that Cuban authorities planned to release 52 political prisoners, all those remaining in jail from the Black Spring crackdown in 2003.
Some people find it entirely appropriate that the U.S. government support Las Damas, particularly at such a momentous time for the group. Others object, saying U.S. officials should not get involved in Cuba's internal affairs.
The debate over the U.S. role in Cuba is timely because $20 million in democracy funds for the island remains hung up in Washington. Juan Tamayo described the political fight in Wednesday's Miami Herald.
Sen. John Kerry placed a hold on the $20 million on April 1, saying he wouldn't allow the funds to be released until the State Department answered his questions about the programs.
Read a summary of the State Department's answers here.
A congressional source told me that Kerry wants to cut the funded amount from $20 million to $15 million.
That position angers democracy advocates who say that the U.S. government does not do enough for opposition groups in Cuba. 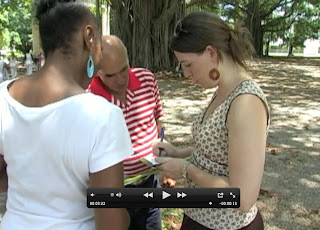 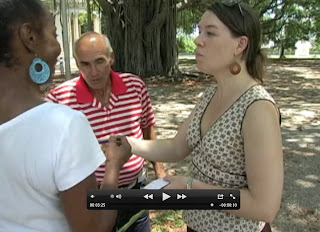 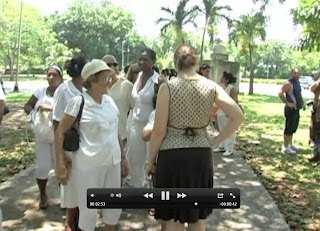 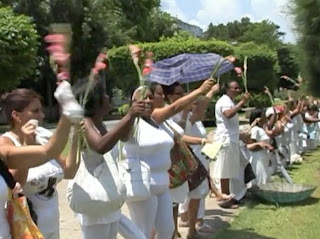 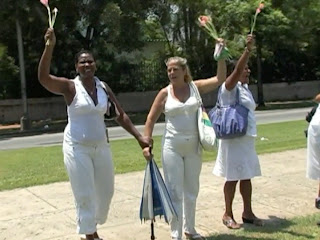 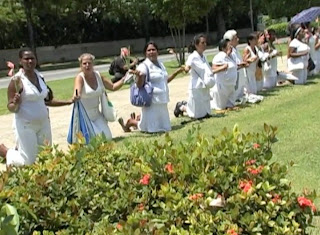 Kathleen Duffy's open support of dissidents on the streets of Havana, where any dissident is welcomed inside the huge US Interests Section building to use phones, computers, etc., to spread their anti-Cuban venom, is something that even the most famed and most sensible dissidents on the island -- such as Elizardo Sanchez and Oswaldo Paya -- strongly believe hurts their cause more than it helps it. It makes one wonder why Josefina Vidal, Cuba's Minister of North American Affairs, even tolerates the US Interests Secion in Havana as a trade-off the the Cuban Interests Section in D. C. Vidal is well aware that, back when she headed the Cuban D. C. office, the tight restrictions imposed on her would have made headlines if, out on a D. C. street, she had said an innocent "Hi. How are you?" to a D. C. citizen. Cuba has gained worldwide praise for stressing sovereignty and equal treatment in its international dealings with other nations. The disparity in the U. S. Interests Section in Havana and the Cuban Interests Section in D. C. makes a mockery of that Cuban stance, and Vidal's acceptance of that situation is baffling considering her unchallenged powers in those areas and her normal priority of clearly separating mercernaries from dissidents. So, Tracey, on your next trip to Cuba (this month or July you say), be sure to ask Vidal why she tolerates the U. S. Interests Section in Havana.

Staff of the Cuban Interests Section in Washington meet regularly with US citizens, not only in their own office but also in restaurants and the offices of Americans. They attend events at think tanks like Brookings and New America Foundation and are able to speak at educational institutions within the beltway.

They observe Congressional hearings and meet with members of the House and Senate and their staff. They have access to State Department counterparts.

Could they observe an anti-war rally, anti-embargo or other protest in Washington and speak to participants? Certainly.

The staff of the US Interests Section in Havana are far more restricted in their access to Cuban institutions and individuals. Official contacts are usually forbidden and personal contact can result in questioning and punishment of the Cubans who are involved.

Obviously a major difference is that the US government overtly calls for system and regime change in Cuba and we wage unceasing economic warfare through our unilateral embargo. Congress appropriates money to foster opposition to the government and USAID funds dumb and counterproductive projects for that purpose.

Leaders in Cuba, not least the published reflections of Fidel Castro, still aspire to change in the US system and its role in the world. And US political figures will never give up their pro-democracy, pro-human rights rhetoric.

The question is how both governments behave and whether they carry out antagonistic intervention rather than maintain a spirit of mutual respect, the way the US does with Vietnam and China and other countries whose values differ from our own.

At an earlier time both countries fished in the troubled waters of the other. Now only the US does.

Rich Haney's goading of a woefully mistitled Josefina Vidal to close USINT oddly reflects the goal of Assistant Secretary Roger Noriega and Jim Cason during the Bush Administration. Cason's deliberately provocative behavior as head of USINT prompted Cuba's crackdown in the Black Spring of 2003. Hard liners of all political stripes have a common agenda to discourage normal interaction and maintain the past rather than risk the future. (c.f. Sen. Marco Rubio’s attack on Jonathan Farrar, current head of USINT http://miamiherald.typepad.com/cuban_colada/2011/06/rubio-rips-farrar-at-senate-confirmation-hearing.html#ixzz1PAZeGr9h )

Ms. Duffy's presence at an opposition demonstration would be far more appropriate if US Cuba relations were otherwise normal. Western European diplomats do so frequently.

I recall that the State Department bans fraternization with Cubans.
See post: http://alongthemalecon.blogspot.com/2011/03/photo-credit-state-magazine-havana-was.html

I have long admired and supported John McAuliff's opinions and efforts regarding U.S.-Cuban issues. However, I believe he is misguided in his appraisal of and references to Josefina Vidal ("woefully mistitled Josefina Vidal" -- WHAT DOES THAT MEAN?). In two particular instances -- once at the Kennedy Center when her speech overwhelmed a roster of celebrity historians and during a Q & A with editors of the Jamaica Observer -- Vidal detailed and decried one-sided disparities between the Havana and D.C. Interests Sections. That's why I'm surprised she tolerates the U. S. Interests Section in Havana although I agree that it is now run by more sensible people than the Cason and Huddleston zealots during the GWB years. At a well-attened news conference, on Cuba's top TV program (Roundtable) and on a YouTube video, Vidal used clandestine phone tapes, video, photos, and envelopes to detail how the U. S. Interest Sections itself delivereddelivers support, including cash, to dissidents. Mr. McAuliff, I'm sure, disagrees with me as to whether Vidal has the power (authority) to close down the Havana Section at the expense of losing the D. C. one. I think she does and even after the passing of her biggest supporter, Fidel, Vidal, because of his legacy and, more significantly, because of her brilliance, she will continue to maintain such powers if she so desires (she is very modest and disdains both the burden and the scrutiny of power). "Woefully mistitled" does not accurately define her. She is more important than her title -- Minister of North American Affairs -- but considering that D. C., Miami and Union City are all in North America, her title alone signifies a degree of importance. Also, the copious photos and videos of Kathleen Duffy huddling with dissidents on the streets of Havana suggests Cuba is awash with dissidents. Josefina Vidal, leading dissident Oswaldo Paya, declassified U. S. State Dept. data, etc., all agree the dissident community in Cuba is "very small." The spotlighting of Duffy distorts that fact.

CORRECTION TO THE EARLIER POSTING: The Josefina Vidal speech in which she overwhelmed (as the sole standing ovation reflected) such famous historians/writers as Ted Sorensen and Arthur Schlesinger Jr. was at the Kennedy Library in Boston, not the Kennedy Center in D. C.