Is Fidel Castro in the picture? (updated) 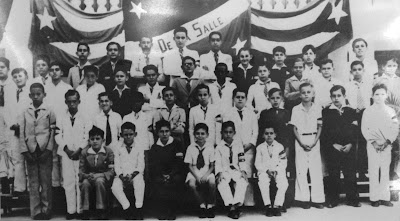 Colegio La Salle in Santiago de Cuba
I posted this photo in Jun 2010 and was under the impression that it shows Fidel Castro and his classmates at Colegio La Salle. I thought that I spotted Fidel Castro in the back row.
A reader - a former La Salle student who says he's in this picture - tells me the photo was taken in 1957 and Castro isn't in it because he was already in the Sierra Maestra. Any other LaSalle students recognize the photo?

July 2 update:
Several more readers say they doubt Castro is in the photo. Emilio Ichikawa, an accomplished cyber-sleuth, dug up a second La Salle photo, below. As you can see, Castro is wearing a dark school uniform, very much unlike what students are wearing in the photo above. This is an official photo that appears on the Cuban embassy's website in Hungary. 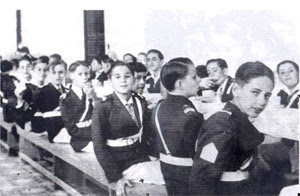 Despite all that, I am sticking with my guns. I went through my photos to try to find out when I shot that top picture. It turns out I took the photo at the Castro family ranch in Biran, where Fidel, Raul and Ramon were all born. The photo was on the wall of a room in the house and it was said to be of Fidel Castro and his classmates.
Posted by alongthemalecon at 7:50:00 AM

I am not a former la salle student, but I would venture to say he is not in that photo.
I think you might be able to get closer to the truth if you can get someone to date the photo for you.

Fidel Castro does not appear in the photo that has been provided.