Thanks to the Pulitzer Center in Washington for posting my latest reporting on democracy programs in Cuba. The stories are timely in light of the newly disclosed State Department memo responding to Sen. John Kerry's questions about the programs. 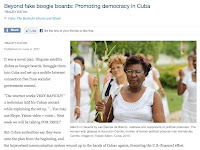 It was a novel plan: Disguise satellite dishes as boogie boards. Smuggle them into Cuba and set up a mobile Internet connection free from socialist government control.
"The internet works VERY RAPIDLY!" a technician told his Cuban contact while explaining the set up. "...You may use Skype, Yahoo video + voice... Next week we will be talking FOR FREE!"
But Cuban authorities say they were onto the plan from the beginning, and the improvised communication system wound up in the hands of Cuban agents, thwarting the U.S.-financed effort.
Three years later, U.S. democracy programs in Cuba have been redesigned and improved, their supporters say. And they are operating on the island, despite a 20-month delay in new funding and political fights over their effectiveness.
The U.S. Agency for International Development and the State Department have set aside more than $94 million for the democracy programs since 2007, budget figures show. The programs form a key part of President Obama's bid to promote democratic change in Cuba, something 11 successive American presidents have failed to do.
"I think the programs are important," said Mauricio Claver-Carone, a leader of the U.S.-Cuba Democracy PAC, which supports hard-line policies against the Cuban government. "No program is perfect. But I think we have seen continuous improvement." (continue reading on Pulitzer Center website)

Cuba Pro-Democracy Programs: Leave it to the CIA?

U.S. democracy programs in Cuba might be more effective if the CIA managed them instead of the State Department or the Agency for International Development, some congressional staffers say.
"These programs are not classified programs, but they are clandestine programs, which means that for purposes of transparency they have some real issues you've got to work through,” said a Capitol Hill source who is knowledgeable about the programs.
"If we were to give the $20 million to the CIA, this would work a lot better because then they could put it in the hands of professionals who actually do this stuff."
(continue reading on Pulitzer Center website)