American pop culture – everything from movies and music to TV shows and fashion – has more impact in Cuba than U.S. government democracy programs that cost millions of dollars every year, Canadian journalist Jean-Guy Allard said.
“Cultural junk” from the United States has been much more effective in penetrating Cuba than “expensive government programs,” Allard said in an interview. ”But the U.S. administration won't trash its propaganda and subversion programs because the Miami guys won't let it do so. And their influence in Congress is so strong that many of the millions will likely keep landing in their pockets.
“I wish I were wrong."
Allard writes for Cuba’s state-run Granma newspaper and many other Latin American publications. “Just Google me," he says.
His coverage wins praise in Havana and Caracas and criticism in Miami and Washington, D.C.
Allard worked for Le Journal de Montréal and Le Journal de Québec newspapers in Canada from 1971 to 2000 before settling in Havana.
He said he intended to retire, but has been busier than ever. He is the author or co-author of several books, including, “Permanent Aggression: USAID, NED and CIA”, “The Rise and Fall of Reporters Without Borders”, and “The Miami FBI Terrorist Connection."
He writes frequently about U.S. policy toward Cuba and anti-Castro militants, which he describes as the “Miami mafia.” 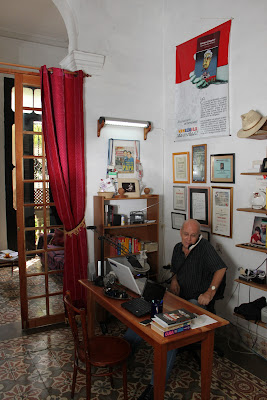 Allard said the press outside Cuba has created a caricature of Cuban society in the United States. That contributes toward all of the “false and uninformed information” that exists about Cuba.
Allard said the vast majority of Cubans don’t know dissident leaders in their country. But the activists are often portrayed in the foreign press as having a significant following in Cuba, which Allard said he doesn’t believe is accurate.
He said it would be difficult to track the dollars spent on U.S. democracy programs in Cuba.
“There are many ways to send money. You can send money to Cuba via Western Union. It’s very easy. And a Cuban getting the money here in Havana can just say it’s from a relative in Tampa. No one has to know it comes from the U.S. government or an organization that gets U.S. funds. You can just say – I have an old aunt in Tampa who sold her house and sent me some money.
“But the U.S. confesses that it finances subversion here and the living standard of its media stars is something so scandalous that you don’t need to be Sherlock Holmes to guess that the dollars and the euros are flowing in."
Allard said the international press often gives a distorted picture of Cuba, exaggerating its failures and ignoring its successes.
Cuba has a low crime rate, the streets are safe and murders are rare, he said.
“I’m much more afraid of a policeman in Miami than here. Just look at how much people here argue with the police. You do that in the United States, and the officer will call for 10 more policeman. But here, the police are more like the police in London of the 1950s and ‘60s. They didn’t have – or need – guns. A lot of Cuban policemen don’t need them, either.”
Posted by alongthemalecon at 7:24:00 AM