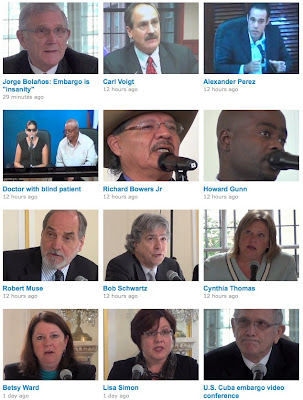 WASHINGTON - America's half-century-long ban on trade with Cuba is "un-American" and should be eliminated, Cuban ambassador Jorge Bolaños Suarez said Friday.
Speaking at a video conference with officials in Havana, Bolaños said the U.S. trade embargo causes economic, moral and spiritual harm. He said the sanctions cost American businesses billions of dollars in lost sales per year. But it's not just an economic issue, he said.


It is a matter of heart. The blockade should be eradicated. It is so un-American to keep a policy in place that has not worked for a half century. The policy is defined in many ways - one way is insanity.

I posted video clips of the conference at Along the Malecon's Vimeo channel.


We've all lived through this 50-year embargo. It hasn't worked.


kills just as surely as bullets and bombs. The embargo against Cuba is an act of war.

On Oct. 25, the United Nations is scheduled to consider a resolution to condemn the embargo. It is expected to be a lop-sided vote, with only the United States and a few other nations approving of the embargo.
No other issue in the history of the United Nations has so thoroughly isolated the United States, Bolaños said.
Supporters of the trade ban insist it remain in place, calling it an important tool in forcing Cuba's socialist government to adopt democratic reforms.