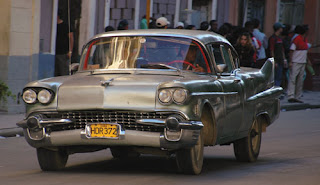 Earlier today I posted new information on organizations that received USAID and State Department grants this fall. See post entitled, "More details on $18 million in Cuba grants."
I also wrote a post about the Foundation for Human Rights in Cuba. See "Cuba Money Trail: Tale of two Miami non-profits."
Several readers over the past few weeks had asked me to write something about a new award given to the FHRC.
As I looked into that, some other grant expenses caught my eye. The Directorio Democratico Cubano, a non-profit in Miami, reported to the IRS more than $13.5 million in expenses from 2005 to 2009.
Directorio expenses reported from 2007 to 2009 included:
Specific foreign countries cited included:
I'm not taking issue with the struggle for greater freedom in Cuba, but it seems clear there is a stark difference in the way the FHRC and the Directorio use Cuba grant money.
Posted by alongthemalecon at 12:48:00 PM

Using these grant money for personal world travel is stealing. The State department should audit these people more thoroughly and check if they really deserve to get the grants.

The State Department hired a private company to do an audit, but will not release the results.