Tribal chief: Rival is off the reservation 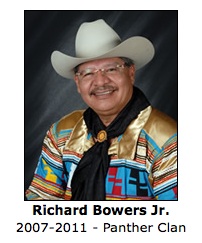 A Seminole Indian who spoke out against the U.S. ban on trade with Cuba at the Cuban Interests Section in Washington, D.C., does not represent tribe, Seminole Tribe Chairman James Billie said in an Oct. 26 letter.
Richard Bowers Jr. was described as the tribe's "ambassador of economic affairs" when he criticized U.S. policy toward Cuba at an Interests Section conference (see videos of event here).
Billie said the "ambassador" position does not exist, according to his letter, addressed to U.S. Rep. Ileana Ros-Lehtinen and posted today by the Capitol Hill Cubans blog. Billie wrote:


...the comments of Mr. Bowers in no way represent the sentiment or opinions of the Seminole Tribe of Florida.

Mauricio Claver-Carone, editor of Capitol Hill Cubans, wrote that he was surprised to hear Bowers' rhetoric since the Seminole Indians have "been historically sympathetic to the plight of the Cuban people under Castro's dictatorship."

The Seminole Tribe of Florida Inc. website lists Bowers as the board president from 2007 to 2011. He lost that post in May 2010 when Billie was elected chairman.
Billie had been impeached as chairman "amid financial scandal" eight years ago, the South Florida Sun-Sentinel reported.
The Miami Herald said that tribal leaders removed Billie after finding "a pattern of financial irregularities and falsified documents." The newspaper said:


At the peak of his power, the perks of Billie’s job included a $9 million jet that once belonged to Philippines President Ferdinand Marcos.
After losing control of the tribe in 2003, Billie largely faded into anonymity, living quietly in a remote part of the reservation and earning money building ancestral Seminole homes called chickees.
Under its new leadership, the Seminole Tribe was wildly successful in some respects, as its gaming operations steadily grew and the tribe successfully negotiated a revenue-sharing agreement with the state that allows the tribe to offer blackjack and other table games in addition to slots.
But the tribe’s spending of gaming profits has been criticized by the National Indian Gaming Commission, which last year found the Seminoles improperly spent gambling revenues on jewelry, cars, travel and other personal expenses.

I wonder: Did gambling proceeds pay for any trips to Cuba? Bowers has traveled to the island, according to a Q&A published while he was president. It read:


Question: What do you hope to accomplish for the remainder of the present term?
Bowers: I think we could accomplish something that‟s never been done before. We have a relationship with Cuba right now. And from my going to into Cuba talking with the ministers of Cuba. We have endless opportunities of food and culture. All the benefits of a 3rd world country needs. Beef, orange juice, anything that we can supply. Also giving the opportunity to other tribes to participate.

A personal note: Reading about the Seminole Tribe - and especially Billie - brings back memories. Billie shot a rare Florida panther in 1983. He was arrested and charged with killing an endangered species. I covered the conclusion of his trial for the Miami Herald.
Billie was acquitted.
Posted by alongthemalecon at 10:55:00 PM