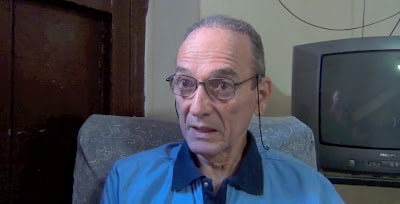 See part 1 and part 2, part 3 and part 4 of an interview with Héctor Maseda on Vimeo.
I spoke to Maseda on Dec. 15, the day after the National Endowment for Democracy honored his wife, Laura Pollán, for her efforts to free political prisoners in Cuba.
Maseda is a Cuban journalist and former political prisoner. In the interview, he talked about the NED award and also told me what his life has been like since the death of his wife, who was leader of Damas de Blanco or Ladies in White.
He also spoke about Cuba's political opposition and said he believes that the socialist government is in its "final phase."
Pollán died suddenly in October 2011. Maseda contends that the Cuban state caused his wife's death, directly or indirectly. He said he sent hair and tissue samples from his wife to a laboratory in the United States to try to better understand what killed her.
I spoke with a Cuban official about Maseda's belief that officials may have contributed to his wife's death and he dismissed the idea.