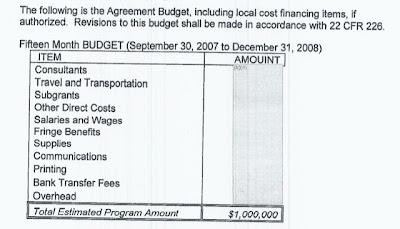 The U.S. Agency for International Development has released a new document related to a $1.47 million project carried out in Cuba from September 2007 to June 2009. But the agency redacted key details from the document, including a cost breakdown showing how much was spent on "consultants, travel and transportation, subgrants, other direct costs, salaries and wages, fringe benefits, supplies, communications, printing, bank transfer fees, overhead."

Also redacted were the names of personnel, and the project proposal was withheld in its entirety. See USAID's explanation. And the program description was heavily censored. It read:

Bottom line: USAID says almost nothing about how it spent $1.47 million and Barack Obama's pledge for a more open government is just that - a pledge, little more.


I requested the USAID document and many others in October 2011 under the Freedom of Information Act, or FOIA. What sets this document apart is that it's the first one I've gotten back that offers a few scant details about USAID's Office of Transition Initiatives' work in Cuba.

OTI launched the Cuba program in 2007 because U.S. officials thought Cuba was on the verge of change. A document I obtained in 2008 stated:


With President Fidel Castro’s resignation after 49 years in power and the recent selection of Raul Castro as his successor, Cuba is, at the very least, undergoing a symbolic transition that might signal a broader democratic political transition in the near future...


From a political development perspective, the “debate critico” may be creating an important political opening for the people of Cuba and for USAID/OTI engagement. There is evidence that this process is already allowing space to debate the current system. The BBC recently aired a video from a computer science school in Cuba that showed students peppering the head of the Cuban National Assembly, Ricardo Alarcon, with questions...

There have also been numerous recent articles that point to a growing discontent among the younger generation (the so-called Generation Y) that grew up during the economic downturn and later reforms in the 1990s... This political space for dissent, while still nascent, represents a window of opportunity for USAID/OTI to support a peaceful democratic transition.

USAID said the purpose of the contract was to "connect non-traditional groups with other democratic actors in the region and support youth-led, independent media initiatives."

What intrigues me about OTI is that it appears to be an agency designed to swoop in and help create a government that officials believe will satisfy U.S. foreign policy goals. OTI's website says: 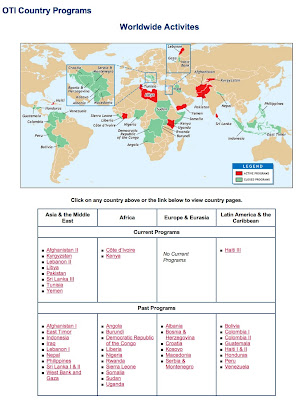 What's curious about the Freedom House grant is that its initial agreement with USAID prohibited the non-profit organization from providing cash grants to individuals or groups in Cuba. The contract said:


...no USAID funding made available under this cooperative agreement will be used for cash assistance to individuals or groups residing in Cuba.

My question is this: How do you spend $1 million without giving any of it to pro-democracy leaders or groups in Cuba?

I suppose you could run a program like Estado de SATS without providing money to Cubans. But Estado de SATS didn't get going until 2010 or so. I wonder what program cost $1.47 million and operated from September 2007 to June 2009?

The contract with Freedom House also said the group wasn't allowed to provide any support to the Cuban government or its employees. But it left a loophole. It said:

USAID modified the contract in October 2008, removing the restriction on passing out cash grants to people or groups in Cuba.

The contract also states that the agency wasn't required to include its usual branding with material it distributed. It said:


...due to the political sensitivity of the program, USAID will not require any attribution to USAID or to the U.S. Government in any materials that will be distributed on the island.

Not surprisingly, OTI doesn't mention Cuba on its website.
Posted by alongthemalecon at 11:04:00 AM