I was looking around on USAID's website and came across a page called U.S. Overseas Loans and Grants. It contains some historical data on U.S. economic assistance to Cuba. These numbers don't represent all U.S. government spending on Cuba-related programs. Most of this is USAID and State Department money.
I found the numbers interesting because they show spending amounts over time.
The Overseas Loans and Grants website use the term "economic assistance," but this clearly isn't money that went to the Cuban government after 1959. U.S. agencies spend the money without Cuban government permission.
It would be interesting to add military and intelligence agency spending, but I don't have those figures.
I made these charts using data from the Overseas Loans and Grants website. Dollars not adjusted for inflation in the chart above. Below dollars are adjusted. 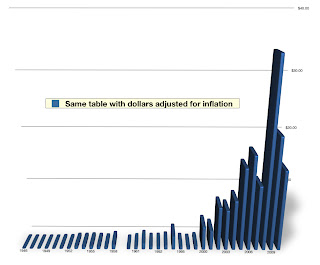 I know of one group that donates a school bus loaded with humanitarian aid (medicine, computers and such once) a year. Is that ever tracked? I am sure that this is not the only group doing this!

I think the humanitarian aid is great. I don't know if anyone is keeping track of that.