The U.S. Agency for International Development paid a Washington, D.C., consulting firm $121,673 to evaluate a Cuba program that was based in Costa Rica, contract records show.
The QED Group, at 1250 Eye Street, NW, Suite 1100, carried out the contract from to Sept. 29, 2010, to March 30, 2012, according to USASpending.gov records.
The records don't name a specific Cuba program. My hunch is that QED evaluated programs that were led by a private, for-profit company called Creative Associates International (see "Private Contractor has a penchant for privacy").
In September 2008, USAID gave Creative Associates a $6.5 million grant for a Cuban civil society program that was initially based in Costa Rica. The federal agency's Office of Transition Initiatives, OTI, oversaw the program.

The QED Group has evaluated OTI programs before. In April 2011, the company produced a 64-page report entitled, "USAID/OTI's Integrated Governance Response Program in Colombia: A Final Evaluation" (see report).
The report noted the value of a low profile:


In places where the U.S. role, if known, would likely be disdained by the beneficiary communities — as in Afghanistan, Pakistan, or Haiti — or stigmatize the partner government, OTI should maintain its anonymity as a donor and let the partner government take the lead and the credit for the projects.

I can see why such a strategy might be used in Colombia. At the same time, it makes me wonder how many anonymous, clandestine or secret programs are carried out in Cuba.
I also wonder what taxpayers got for the $121,673 that USAID shelled out to QED.
Creative Associates evidently had to abort its Costa Rica mission - I don't know why. QED must have said something about that in its report.
The company, of course, has a vested interest in keeping anything under wraps that might embarrass USAID.  The agency is QED's biggest client and I'm sure company officials want to avoid derailing the gravy train.
Millions of dollars are at stake. The federal government paid the company $179,627,688 from 2007 to 2012, USASpending.gov records show.
That included $149,285,926 from USAID and $6,949,114 from the State Department. QED isn't going to jeopardize that.
See below for a sampling of QED contracts for work in far-flung spots around the world (click images to enlarge). 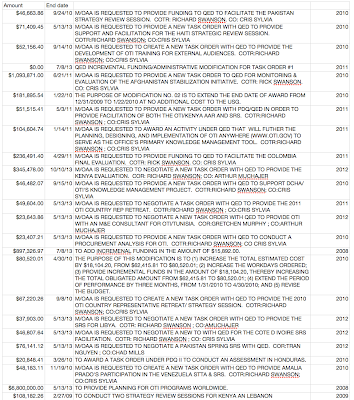 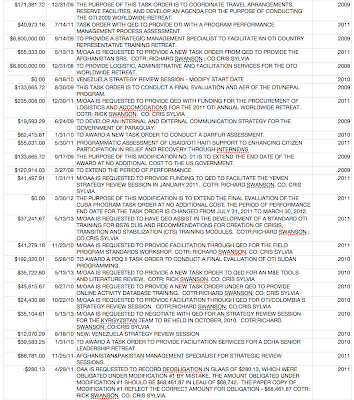 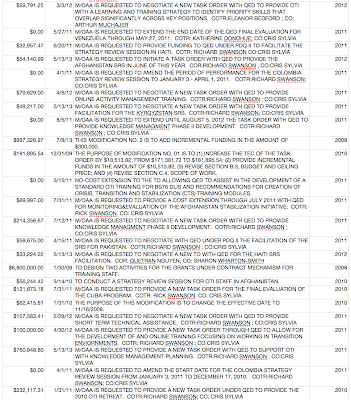 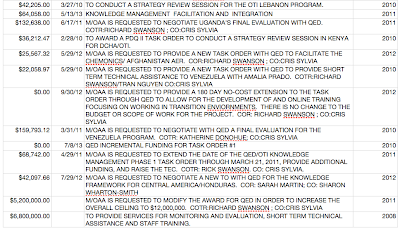