A government audit in 2006 said USAID programs in Cuba were poorly managed. Among the findings: Some grant recipients were sending Godiva chocolates, cashmere sweaters and Nintendo Game Boys to Cuba.
Frank Hernandez-Trujillo, executive director of the Grupo de Apoyo a la Democracia, was unapologetic about delivering Nintendo games to Cuba. He told the Miami Herald:


I'll defend that until I die. That's part of our job, to show the people in Cuba what they could attain if they were not under that system.


During 2008, GAD send 36,970 pounds of food/clothing items and over-the-counter medical supplies; and 6,380 pieces of informational materials such as books and other materials to more than 500 families of political prisoners and political activists in Cuba.

The form lists $835,345 in "grants and other assistance to governments, organizations, and individuals outside the U.S." That was listed as food and clothing and appears to be the amount of aid that went to Cuba.

The IRS requires that grantees list financial transactions with relatives. The 2008 form shows that Hernandez-Trujillo gave his son $22,000 to make a video. The tax form doesn't say anything about the video's content or purpose.

In 2009, (see form) Frank Hernandez-Trujillo reported drawing a salary of $11,842. The Form 990 shows his organization sent 3,830 pounds of food and medical supplies to 224 families of political prisoners in Cuba. Program expenses were listed as $188,418.

Federal records show that USAID awarded Grupo de Apoyo $9,020,708 in grants from 2004 through 2011. Funding was suspended in 2008 while federal officials investigated USAID grantees.

The investigation hit the group hard. Spending records don't make the total losses clear, but it appears to me that the Grupo de Apoyo gave up some $700,000 in federal funding in 2008 and was not funded at all in 2009. That would mean that the organization's total federal funds received from 2004 to 2011 would be closer to $8.3 million than $9 million. 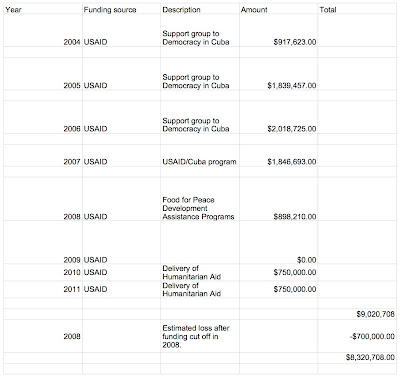