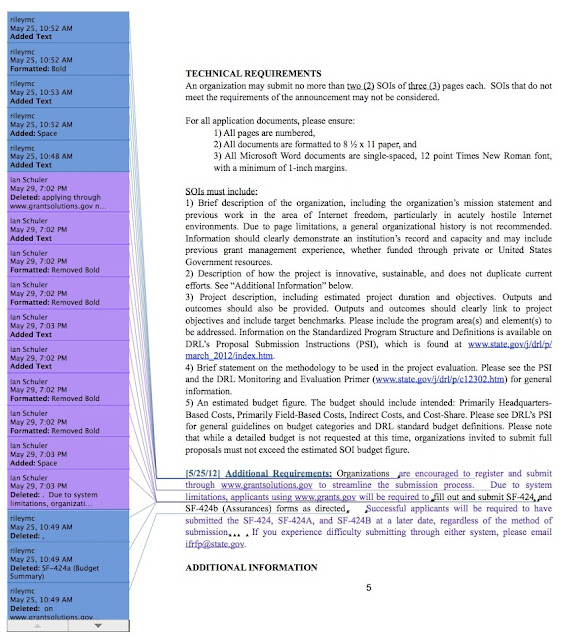 The State Department is now reviewing proposals from organizations interested in running Internet freedom programs in a range of countries, including Cuba.
Some $23 million in grant money is up for grabs. The agency expects to award grants worth $500,000 to $5 million each.
U.S. government-financed instructors will cover such topics as "secure communications" and "basic security principles for the Internet," according to a State Department document, which, ironically, was not secure, allowing readers to see editing changes, authors and other information.
The unsecured notes in the margin of the public notice show that Ian Schuler - program manager in the State Department's office of Internet Freedom Programs - last edited the document at 7:02 p.m. on May 29.
Maybe this is all part of a new State Department push for transparency, letting taxpayers know what their public servants are doing and when, but I doubt it. 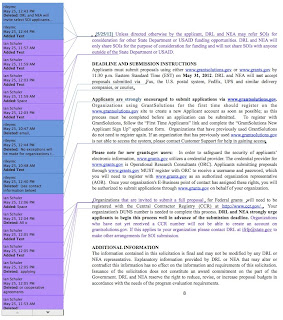 Both for- and non-profit organizations, as well as non-profit schools and research centers, are eligible to receive the Internet freedom funds.
The State Department requested letters of interest on May 4 (see public notice). The cut-off date for applications was May 31.

The agency's Bureau of Democracy, Human Rights and Labor is seeking organizations that will manage projects in:


Concepts may be global in nature, regional or country-specific.

In past years, officials say U.S.-financed Internet freedom programs have:


Contributed to the development and deployment of anti-censorship and secure communications technologies in countries where Internet used is heavily filtered and monitored;

And NGOs and universities have greatly advanced research and understanding of the nature of threats to Internet freedom around the world, and ways to respond to such threats. 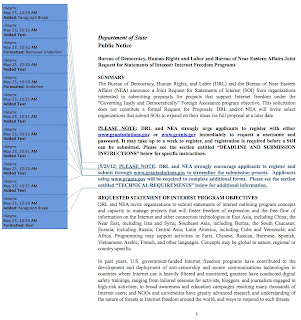 
The need to continue to advance Internet freedom remains great.

More work is needed on:

Funds for the grants comes from the fiscal 2012 budget, which keeps programs afloat from October 2011 to September 2012.
For more information on the Internet freedom grants, try Googling the funding opportunity number: DRLA-DRLAQM-12-050.

Related:
March 2011: U.S. government will spend $30 million for Internet freedom projects
Posted by alongthemalecon at 9:18:00 AM