IRI's Cuba poll: Made in USA 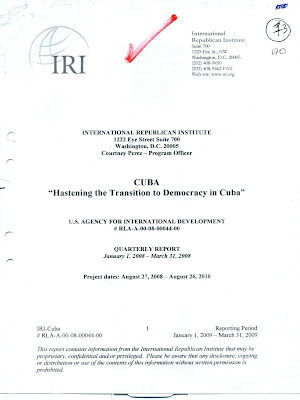 The latest International Republican Institute poll in Cuba got a lot of attention. A June 4 headline in the Miami Herald summed up the results: "Cubans tell pollsters that Raúl Castro’s reforms are having little impact."

I'm not doubting that a lot of people in Cuba want change. Nor am I questioning the professionalism of the pollsters or the value of expanding basic freedoms in Cuba. But I can't imagine that the IRI is going to say anything good about Cuba when its survival depends on the U.S. government.

The U.S. Agency for International Development gave the IRI $3.7 million for its Cuba program from 2008 to 2010.

The U.S. government also finances IRI programs in other countries and gave the organization a total of $138 million from 2007 through 2011.

The IRI's current Cuba grant ends on June 30. I have filed 20 Freedom of Information Act requests to get more details about IRI's activities in Cuba from 1998 through 2009 (see FOIA requests). Those requests haven't produced any results so far.

Luis Miguel Rosales, of the pro-government website Miradas Encontradas, wrote about the organization on April 17 and on April 19 and posted three internal IRI documents that describe the organization's work in Cuba. You can download them here:


To ensure that key Cuban actors have access to critical information that is only available via the Internet, as well as the ability to dispatch messages and images from Cuba to the outside world, IRI will develop, build, distribute and maintain up to ten satellite devices for distribution to up to ten key civil society leaders, opposition figures, bloggers or entrepreneurs in Cuba. IRI will also train recipients in the use and maintenance of these devices.

The organization also said it would boost Cubans' ability to send instant messages:


IRI will implement a pilot program to employ mass SMS-messaging for activist activities, network organizing, or polling purposes. This program will initially be targeted at youth or technically savvy network partners, with a goal of extending its reach and adding more devices if initial efforts contribute to program objectives.

The IRI document said it was working with "roughly 700 individuals directly or indirectly" in Cuba and would continue "to seek out new like-minded networks with which to partner."

It said Guatemala would be used as "a hub for recruiting and managing Latin American trainers in Central America and neighboring Caribbean Basin countries.

The work plan also discussed the importance of the organization's surveys. It said they are not just opinion surveys, but a way to identify and recruit activists.


IRI will continue to utilize public opinion research as an integral part of all facets of its program in Cuba. IRI will utilize public opinion research to inform every aspect of its civil society development program and assist partners in utilizing survey results in outreach, issue identification and advocacy, message development, and communications.

In addition, IRI surveys will assist more advanced civil society organizations in gauging the results of their efforts, as the organizations increased level of activity bears fruit over time, and in making mid-course adjustments as necessary. Finally, IRI surveys will serve as an important source of concrete information to assist the international community in deciding how to best support and assist Cubans.

The IRI document discussed its 2008-09 opinion surveys, not the poll that was just released. The document said:


The results of the surveys will be publicly released, and the specifics of the findings will be addressed in closed-door briefings with U.S. government officials. The results will also be shared with all Latin American and Eastern European diplomatic officials in Washington, as well as other select countries that maintain an interest in Cuba. Finally, the results of each survey will be distributed to civil society networks for dissemination on flash drives and CDs.

That goes to my point about one of the motives behind these polls - to generate support for U.S. policy toward Cuba.

Miami Herald reporter Juan Tamayo didn't mention that in his story, which read:


Five in six Cubans say they have not benefitted from ruler Raúl Castro’s economic reforms and nearly 75 percent say their family’s economic situation is the same or worse than a year ago, according to a poll made public Monday.

The survey by the International Republican Institute (IRI) also showed the growing disgruntlement among huge majorities of younger Cubans, hinted that optimism is creeping up, and showed an odd slip in those who favor capitalism and democracy.

IRI’s figures backed up the complaint from Cuba analysts that Castro’s reforms have been too few and too slow to fix the sluggish economy. But they also hinted that the reforms have sparked some level of optimism on the island.

It was the seventh Cuba poll conducted since 2007 by IRI, a Washington nonprofit that works to advance freedom around the world. Like its counterpart, the National Democratic Institute for International Affairs, it is technically nonpartisan.

I'm not sure what "technically nonpartisan" means, but saying that the IRI relies on U.S. government funding probably would have been more helpful to readers.
Posted by alongthemalecon at 10:29:00 AM

pretty sure it was a fixed poll. lol

at the least, the poll is politically motivated and that may influence the outcome