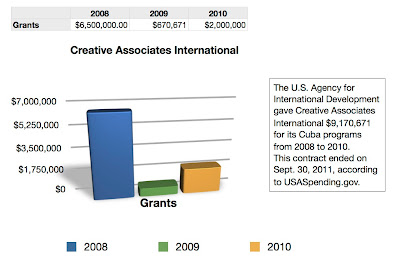 The U.S. government gave a private contractor more than $9 million for Cuba-related programs, but there's barely a mention of Cuba on the company's website.


The first contract was worth $6.5 million. In October 2011, I filed three Freedom of Information Act requests for information about the company's work in Cuba (see letters here). I have not received any documents back from USAID yet.


There are only two mentions of Cuba on Creative Associates' website. One is the company's announcement that it hired Caleb Charles McCarry as a senior associate. Previously, he had been the Bush Administration's optimistically named "Cuba transition coordinator."


The second Cuba mention on the company's website announced the hiring of Enrique J. Roig, who reported field experience in 19 countries, including Cuba.

There is nothing else about Cuba on Creative Associates' website.

ForeignAssistance.gov isn't much help, either, although the website does spell out the Obama administration's philosophy.

In practice, not much of that rhetoric matches reality, at least in the case of Cuba.