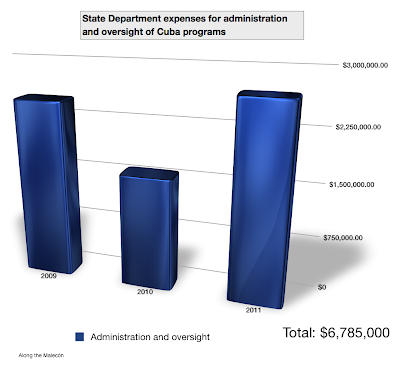 Over the past three years, the State Department has set aside more than $6.7 million for administration and oversight of Cuba programs.
But don't be misled by the word "oversight." It has little to do with transparency or being accountable to taxpayers. I have filed Freedom of Information Act requests for audits of the Cuba programs - audits that cost taxpayers millions of dollars - and I've gotten almost nothing in return (see more on FOIA requests here).
Perhaps the State Department is accountable to private contractors and non-governmental organizations, who are allowed to tell the government what documents and what material can be released in response to FOIA requests.
But good luck trying to get any documents if you're a journalist or a citizen. It is an uphill fight.
It may be a little unfair to say that the State Department oversees itself. After all, the agency contracts out much of the work - audits of the Cuban programs, for instance. But suppose you're a private contractor getting $1 million or $2 million for an audit. You are going to do whatever you can to protect your interests and your bottom line. There is no motive for transparency. There's no motive to publicly disclose any shortcomings in the Cuba programs or to be accountable to the public. That sort of thing could ruin a sweetheart deal with the State Department.

The pursuit of freedom is a noble cause anywhere, of course. But this democracy-promotion business is also just that - a business.
Phil Peters, creator of The Cuban Triangle blog, once called it "the democracy-industrial complex" and I don't think that's a stretch.
The figures on funds set aside for administration and oversight can be found in the State Department's annual congressional notification. 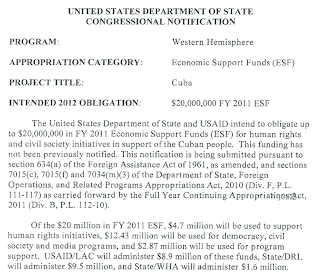 This year's document, dated April 26, surfaced on several websites on Sunday. It looks like El Nuevo Herald obtained the document first. It is informative because it gives a general breakdown of how the State Department intends to spend $20 million in Cuba program funds from 2011.
I presume - and please someone correct me if I'm wrong - that the $20 million refers to the 2011 Cuba funds that have been reported already. If that is correct, then in the spring of 2013 the State Department should send out a congressional notification for the $15 million in Cuba funds that have been previously disclosed.
I'm posting here the congressional notification documents from the past three years: fiscal years 2009, 2010 and 2011.
Here's the breakdown on administration and oversight funds:


These funds will support program management and oversight to ensure program accountability and facilitate the implementation of Cuba programming. These amounts reflect necessary oversight funding proportional to the amount of program funds each office/agency will administer.