The trail leads to Central America 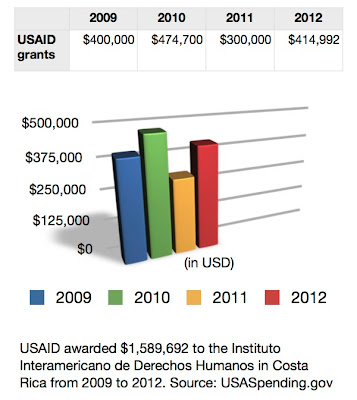 Central America has long been a popular base for political, military and humanitarian operations targeting Cuba.
With that in mind, I was intrigued to see that USAID in 2009 awarded more than $1.5 million to the Instituto Interamericano de Derechos Humanos in Costa Rica.

The initial award, dated April 17, 2009, clearly shows Cuba as the "principal place of performance." In federal government lingo, that's the place where a job or contract is carried out.

But I only saw the Cuba reference once in the five listings related to the contract on the government website, USASpending.gov.

I don't know what that means.

Among the possibilities:
Greater clarity would increase the transparency of USAID programs in the Americas, and it would lessen suspicions that the agency may be doing semi-clandestine work in Cuba.

USASpending.gov records don't give details of the contract. The work is described as "development assistance."

The Instituto Interamericano de Derechos Humanos, or IIDH, isn't listed on USAID's website as one of the agency's current partners in Cuba. They are:

The IIDH is listed as a USAID partner that is taking part in a program to build "more inclusive and equitable democracies in the Americas."