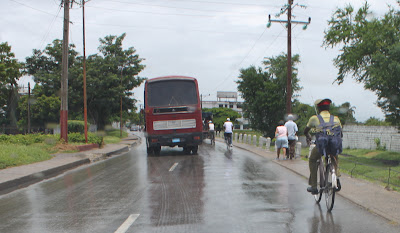 USAID's plan calls for boosting the distribution of aid outside Havana. The document reads:


Given that the economic conditions are more difficult outside of Havana, applicants are encouraged to focus on the provision of supplies to outlying provinces...


Additional excerpts are below:

The United States Agency for International Development (USAID), represented by the Bureau of Latin America and the Caribbean (USAID/LAC), Office of Cuban Affairs is seeking applications for Cooperative Agreements for a three-year Civil Society program for Humanitarian Assistance to Cuba. USAID is contemplating awarding multiple Cooperative Agreements totaling approximately $1 million per year each for the three-year period. Each organization may submit only one application, and each organization is eligible for only one Cooperative Agreement. The
authority for this activity is found in the Foreign Assistance Act of 1961, as amended.

SECTION B - PROGRAM DESCRIPTION
BACKGROUND
Cuba remains the only non-democratically elected government in the Western Hemisphere. Current Cuban law prevents the right to assemble, limits political freedoms, restricts freedom of expression and labor rights, and enforces a state monopoly over mass media. The day-to-day life of Cubans is hampered by the dual currency system, housing and food shortages, and a lack of sufficient transportation.

It is estimated that the regime currently holds at least 50 political prisoners1 for peacefully exercising their right to freedom of expression. Those arrested are subjected to lengthy prison terms and to prison conditions that are harsh and sometimes life threatening. Prisoners are placed in overcrowded prisons that are at great distances from family members, and are beaten or placed in solitary confinement for voicing their concerns. Imprisonment is only one of the many tactics the Cuban government uses to restrict fundamental freedoms, such as freedom of expression, freedom of association, peaceful assembly, and movement. Former political
prisoners who remain in Cuba are heavily scrutinized and intimidated by the Cuban government for their current political activism and are experiencing material difficulties.

In addition to the current and former political prisoners, thousands of other Cuban citizens are detained, threatened, harassed, beaten and arrested for peacefully exercising their fundamental rights. During Pope Benedict XVI’s visit in March alone, over 1,000 people were detained, and in 2011 more than 4,000 people were detained and arrested for political purposes. The effect of such practices creates a climate of fear in Cuban society and suppresses freedom of expression.

These tactics of repression are applied to family members as well. Family members are denied the right to earn a livelihood, denied basic social services, and experience emotional hardship and alienation, among other forms of discrimination and abuse, due to the family member’s association with political opposition.

CURRENT PROGRAM SUMMARY
U.S. assistance programs focus on providing humanitarian assistance to victims of repression, strengthening civil society, facilitating the free flow of information to, from, and within the island, and helping Cubans to create space for dialogue about democratic practices. To encourage civic participation in Cuba, the U.S. program focuses on strengthening independent

Cuban civil society groups, including professional associations and labor groups. Efforts are aimed at increasing the capacity for community involvement in, and networks among, civil society groups. In the interest of advancing human rights, the United States provides humanitarian assistance to political prisoners and their families, and other victims of repression.

The USG has maintained a non-presence assistance program for Cuba since 1996. For more information on the program, please refer to USAID’s website at www.usaid.gov.

PURPOSE
The purpose of this program is to provide humanitarian assistance to politically marginalized individuals and groups in Cuba, including political prisoners and their families. The program is designed to alleviate the hardships on people who, because of their political beliefs or efforts to exercise their fundamental freedoms, have lost some or all of their ability to support themselves or their families, including by being imprisoned or otherwise marginalized or discriminated against.

PROGRAM IMPLEMENTATION
USAID seeks creative and innovative approaches in the design and delivery of humanitarian assistance activities. Applicants should outline how the beneficiaries will be selected and prioritized, and proposals should clearly explain how and where supplies will be procured and delivered throughout the island. Applicants should also describe the types of supplies that are the most appropriate and the rationale, with the understanding that the materials delivered are those that are most in demand by the targeted beneficiaries throughout the island. Note that items that have passed their expiration date are not acceptable in the implementation of this program. Applicants should outline how they will maximize the amount of materials to be distributed while maintaining high quality. Local procurement, to the extent possible, is highly
encouraged. Assuming appropriate disbursement and monitoring mechanisms are established, the use of cash grants is a possible option for delivering assistance to meet the needs of targeted beneficiaries, subject to the approval of the Agreement Officer. Applicants should also clearly describe the methods to distribute the supplies, as well as a process that will provide confirmation of final receipt to the targeted beneficiaries. Applicants should also demonstrate how relationships will be built with the beneficiaries, and how the proposed program will coordinate with other programs to prevent duplication and ensure complementarities with other U.S. Government programs.

Given that the economic conditions are more difficult outside of Havana, applicants are encouraged to focus on the provision of supplies to outlying provinces and provide details as to how supplies will be distributed among the provinces.

U.S. support to Cuba is subject to restrictions outlined in authorizing legislation Section 1705 of the Cuban Democracy Act (1992) which authorizes the provision of certain assistance notwithstanding any other provision of law. This provision authorizes donations of food to nongovernmental organizations (NGOs) or individuals in Cuba, exports of medicines and medical supplies, and assistance through appropriate NGOs for the support of individuals and organizations to promote nonviolent democratic change in Cuba.