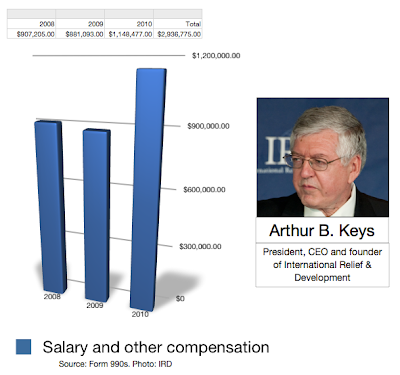 International Relief & Development reported to the IRS in 2010 that it received 99.99 percent of its funding from the U.S. government.
For that reason, some folks might say that the IRD might as well be a federal agency. But it's a non-profit organization that Arthur B. Keys founded in 1998.
Keys is the president and CEO of the organization, which is based in Washington, D.C., and does development work in Cuba and dozens of other countries.
It has been a lucrative position for Keys, who reported earning nearly $3 million in salary and other compensation from IRD from 2008 through 2010.
Posted by alongthemalecon at 11:39:00 AM

What a great blog! You're doing some good work trying to follow the money. I had no idea so much was being spent for so few tangible results.

I'm hoping to travel to Cuba soon, but at the very least your pictures showed me a lot of the country. Thanks!

Thanks for your comments!