(Update: On Aug. 26, the National Committee to Free the Cuban Five let me know that the documents will be filed, but were delayed at the last minute because the legal team needed to rework them so they meet the technical requirements of U.S. District Court in South Florida.)

Lawyer Martin Garbus on Monday spoke about a U.S. government-financed "propaganda machine" that purportedly influenced the conviction of the Cuban Five, including agent Gerardo Hernández.
I wrote about that on Aug. 17 (See "Lawyer: Journalists akin to paid secret agents") and on Aug. 20 (See "Lawyer: U.S. ran illegal 'propaganda machine'"). So did the Miami Herald's Juan Tamayo, who reported on Aug. 21:


An appeals lawyer for the leader of five Cuban spies convicted in a Miami trial filed an affidavit Monday arguing that Radio/TV Marti secretly paid millions of dollars to journalists to influence jury members against his client.

Now someone correct me if I'm wrong, but I don't see that any new court documents were filed in the Hernández case, as the National Committee to Free the Cuban Five had promised.
I have been monitoring Public Access to Court Electronic Records, or Pacer, and there are no new documents in the USA v. Hernández file (Case No. 1998-cr-00721). 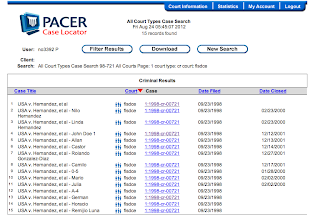 Maybe there's a logical explanation and I'm looking for the affidavit in the wrong place. Anyone know? I'd hate to be the victim of a different kind of "propaganda machine."