Diana Nyad: "When can I get back in?"


Stroking longer and farther than in any of her four attempts to swim from Cuba to Florida, Diana called an end to it early this morning, one day before her 63rd birthday. It took Mother Nature’s biggest force—the weather—to get her out of the water (a second storm cell even larger than the first), but nature’s arsenal for her was out full force throughout her 41-hour endeavor (41 hours, 45 minutes in the water). She was stung by box jellyfish nine times on Monday night alone, with sharks surrounding her as a team of divers labored for hours in the darkness to discourage them away. 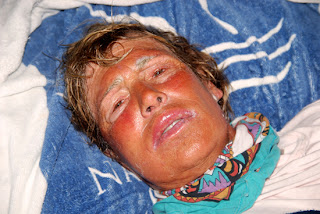 Still, Diana was not discouraged as she was lifted onto her escort boat, and was talking of going back in minutes later. We can’t stay out here, her team told her, it’s too dangerous for you and the crew. This was at 12:55 a.m.; a quarter of an hour later, with lightning, thunder, and roiling winds tossing her tiny escort vessel up and down on the waves like a paper cup, she sat on the back of Quest, a larger escort boat, shaking her head angrily. Fully alert and articulate, she asked, “When can I get back in? I want full transparency that I was out. But I have plenty left in me and I want to go on.” However, the storm went on, too. In a long discussion with her core team, she realized that the obstacles against this swim were too great and agreed at dawn to return to Key West by boat, for the sake of the safety of her team and herself.

Wow! I really admire her effort and persistence.

yeah, she has really given that swim all her effort