I used to watch "American Chopper" on the Discovery Channel, but lost interest because of all the reality show drama: the Junior vs. Senior feud, Mikey's exploration of the art world.
The Teutuls make some wicked motorcycles - the Black Widow Bike, the Fire Bike, the Statue of Liberty Bike and many others. But their show's hyper-commercialization - the merchandising tie-ins, the bobblehead dolls, the corporate bikes for Intel, Hewlett-Packard and other companies - detracted from the purity of building motorcycles, the oil and grease, the sweat and blood.
With that in mind, it was refreshing to meet some of Cuba's motorcycle aficionados. They are actors in a reality show that doesn't air anywhere, but has more true grit and emotion, courage and sacrifice, than just about anything you see on American TV.
They go to incredible lengths to keep their vintage motorcycles running. They can't get on the Internet to order spare parts, or ride to the nearest motorcycle dealership. For years, they've been left alone to resolve their problems, whether it's getting new tires, rebuilding a carburetor or fabricating an exhaust pipe.
I was drawn especially to the Harley-Davidson riders who rumble around on battered old Panheads, Flatheads and Knuckleheads that are all more than a half century old. I had ridden my dad's Harley, a black Road King, and loved that motorcycle.
My father, Mike Eaton, taught me to ride motorcycles in the 1970s. He has owned all kinds of bikes over the years and used to race them in Colorado. When I was a teen-ager, he had a 1959 BSA Gold Star, one of the fastest bikes of the 1950s. He sometimes let me ride that bike when I was in high school and it was always a rush.
Flash forward a few decades and I was traveling to Cuba as a journalist. I met the Harley riders - Harlistas as they're called - and wrote a story about them in 1999. That evolved into a friendship with the Harlistas, a few more newspaper and magazine stories, and now a book.
The book is called "Cuban Thunder: Harley-Davidson in Cuba" and it is now available on the iBookstore. 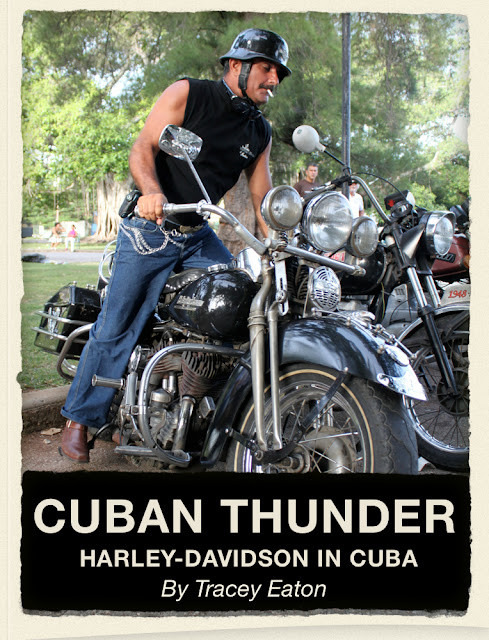 The 181-page interactive book features interviews with more than three dozen Harlistas, along with chapters on Harley-Davidson in pre-revolutionary Cuba, a short video and more than 1,000 photos.
The book is made for iPad. You can download a sample for free or buy it for $5.99. Apple gets 30 percent of each sale; I get the rest. I am donating 20 percent of all the proceeds I receive to Harlistas in Cuba.
The first profile in the book is of Julio Palmero. He not only rides a Harley, he owns a red Continental that he says once belonged to the wife of former Cuban President Fulgencio Batista.
Julio let me ride one of his Harleys along the Malecón in 2010 and it was a thrill.
A year later, I invited Julio to the United States and we rode motorcycles together at a rally in Daytona Beach. Among the highlights for Julio: a swap meet where he picked up some spare parts. He said he also liked the wet t-shirt contest we saw because contestants included ordinary people in the audience.
Among the many other Harlistas I interviewed for the book:

Great story. I learn a little more about you all the time.

I never thought about Harley's in Cuba as we are always exposed to the lure of the 1950's and 60's automobiles still running.

It is incredible what Cubans do to maintain both cars and motorcycles. It's practically a job just keeping them running.

I’d love to get a copy of your book and read all about the Harlistas of Cuba! The part in your post about how the Harley Davidson aficionados in Luyano have not exactly had it easy keeping their vintage bikes going that has struck me. I’m sure it’s their passion and love for the bikes that drive them to keep working on the motorcycles even though it hasn’t been easy.

Max - you're right the Harlistas have an incredible amount of passion. It's tough maintaining a motorcycle with so few resources and parts. But a lot of the Harlistas help each other and that helps bring them together.
Tracey

Restoring a vintage bike is hard, especially when you need some parts that are hard to find in order to complete the project. The Harlistas in Luyano certainly are an impressive group of bike mechanics. Maybe I’ll get a copy of your book and read about the Harlistas. I might visit them when I go on a trip to Cuba too!

Sounds great, Clare. I hope you have the chance to meet the Harlistas and hear their story. Take care, Tracey

It would be even better managing to get some parts or money to help'm restore the American dream in Havana. It takes years to get one Harley to run. A lot of dedication, passion and dreams to feel the freedom in a "cuban Harley" Feliz Navidad.