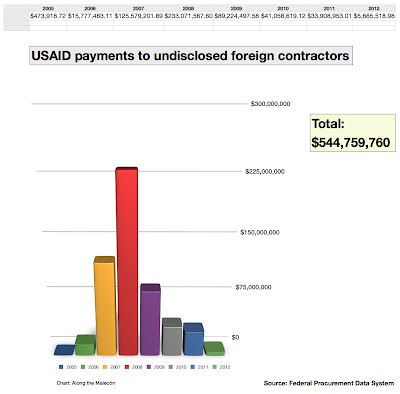 The U.S. Agency for International Development has paid more than three-quarters of a billion dollars to undisclosed contractors around the world since 2005, budget records show.
Over a period of about seven years, the agency signed 12,749 deals with unnamed contractors - 8,325 of them foreign, 4,424 domestic, according to the Federal Procurement Data System.
Records show that $544,759,760 went to foreign contractors and $274,058,499 to domestic contractors. The total: $818,818,825.
USAID revealed the nature of the expenses, citing such spending categories as security, office supplies, Internet publishing, personal services, public finances, draperies and household furniture. But the agency did not cite the names of the contractors, making it difficult to identify all of the individuals and companies that do business with USAID.

One might conclude that USAID has a penchant for secrecy. Or perhaps there's another explanation.
Below are links to Excel spreadsheets listing the contracts. I suspect that only a fraction of the USAID contracts are related to Cuba since the agency spends only a tiny sliver of its budget on Cuba programs, but I don't have breakdown or any additional information on that. The payments to foreign contractors are broken down here by year.


A link to a spreadsheet showing USAID payments to undisclosed domestic contractors from 2005 to 2012 is here.
Posted by alongthemalecon at 8:52:00 PM