Dissident to world: "Wake up!" 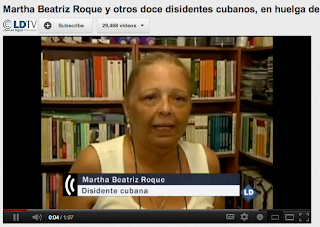 Dissident Martha Beatriz Roque this week is leading a hunger strike in Cuba.
The Associated Press on Thursday reported that she is weak and has stopped taking her diabetes medication.
The protest began Monday with 13 hunger strikers - seven of them in jail, six of them free, including Beatriz Roque.
More dissidents have since joined the demonstration, which now totals 26 hunger strikers, Diario de Cuba reported.
The hunger strikers are demanding the release of Jorge Vázquez Chaviano, a political prisoner who was supposed to be freed Sept. 9.
Beatriz Roque said in a video that they only ask the government for "legality." She said:

Links:
My July 13, 2010 interview with Beatriz Roque, in Spanish
Same interview with English subtitles
Transcript of interview
Posted by alongthemalecon at 9:49:00 PM