The U.S. Agency for International Development refuses to release audits of its democracy programs in Cuba, so it is impossible to know if contractors are effective, honest or efficient.
Contractors have been known to bilk USAID. One such cheater, prosecutors say, is Mark-Anthony Elisha Adams.
Adams and his wife, Latasha Bell, carried out schemes to defraud USAID from 2005 to 2010, according to court documents.

A 23-count indictment against the pair was filed in April 2012. Ronald C. Machen Jr., the U.S. Attorney for the District of Columbia, was quoted as saying:


With this indictment, we are alleging that a former director of a federal contracting company and his wife conspired to steal money that was intended to assist developing countries with serious public health problems. Instead of the funds being used to assist in the treatment of conditions such as HIV/AIDS, the money was allegedly used by Mr. Adams and Ms. Bell to pay for expensive home renovations and purchase luxury vehicles such as a Cadillac EXT and a Mercedes S550.

Prosecutors linked Adams to at least $1,084,031.20 in "false and fraudulent invoices." He was accused of approving invoices for work or services that Bell did not perform and funneling money to bogus subcontractors. 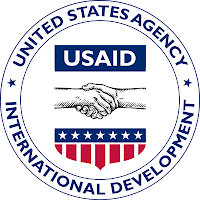 One string of invoices submitted from 2005 to 2008 was worth $185,475, court records show.
The money went toward the defendants' "personal use and enjoyment," including "extensive renovations" of their homes. They also bought two luxury automobiles: a silver Mercedes S550 worth $69,915 and a 2008 Cadillac EXT worth $41,494.
Two other defendants - David Wright and Everett Lipscomb - were also charged in the case.
Adams was project manager for MasiMax Resources, Inc., a Rockville, Md., company that had won a five-year, $36 million contract to implement USAID's Bureau of Global Health analysis, information management and communication activities.
RTI International acquired MasiMax in 2009 and became suspicious of Adams in 2011, according to a story by Law360.
As part of a plea bargain described in court documents filed in October, Adams agreed to:
Bell agreed to:
In return for the pleas, the government dropped 21 counts and did not pursue the maximum possible sentences of 20 years in prison.
Once Adams and Bell ran into trouble, their names wound up in the federal government's Excluded Parties List System. It tracks individuals who should not receive federal contracts or subcontracts because they've been suspended, indicted or otherwise found ineligible.
The government is allowed to do business with banned individuals if it can show a compelling need for that. See the law here. Download a list of 78 individuals who aren't allowed to do business with USAID.
Among those on the list: