In 2008, Creative Associates International received the first installment of what was to be a three-year $15,535,979 contract with the U.S. Agency for International Development.
Creative Associates had a delicate task: To set up a secret base in Costa Rica and run a program there to support democracy activists in Cuba.
The private, for-profit contractor, located at 5301 Wisconsin Ave., NW, Suite 700, was managing the program on behalf of the State Department's little-known Office of Transition Initiatives or OTI. 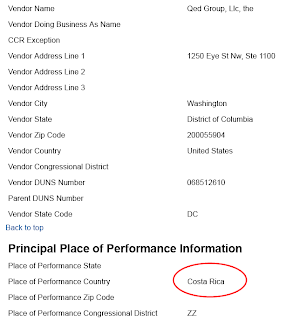 It's not clear how Creative Associates' work contributed to the democracy movement in Cuba.
Federal records show that USAID paid the QED Group $121,673.18 to travel to Costa Rica to evaluate the program.
QED's initial contract ran from Sept. 29, 2010, to July 31, 2011, and was later extended to March 30, 2012.
By that time, records show, Creative Associates had moved its base of operations from Costa Rica to Washington, D.C.
I haven't found any records showing that Creative Associates received the full $15.5 million.
Contract documents I located show that the company received just $11 million, falling $4,365,308 short of the contract amount.
I wrote to USAID to ask for documents related to Creative Associates' work in Cuba and Costa Rica. The agency has not responded to my Freedom of Information Act request, which I filed 405 days ago.
Posted by alongthemalecon at 5:10:00 PM