Alan Gross saga: Who is to blame?

Alan Gross blames his former employer and the federal government for failing to protect him while he carried out a mission in Cuba. He went to Cuba to help set up satellite Internet connections and wound up in prison, facing the prospect of life behind bars.
But I can't imagine that Gross didn't have a sense for the risks of working in Cuba. He had been in hot spots before. He had worked in more than 50 countries, including Bulgaria, the Czech Republic, Russia, Kazakhstan, Lebanon, Palestine, Iraq, Afghanistan, Pakistan, Morocco, Yemen and Haiti.
He had evidently traveled to Cuba, too, before going there as a USAID subcontractor in 2009. (For detailed information on Gross's company, JBDC, see this 5-page statement of corporate capabilities dated January 2009).
Gross listed "humanitarian activities in Cuba" on his 2005 tax records. (See his company's form 990s for tax years 2003, 2004 and 2005).
That said, I find it plausible that his employer, DAI, and USAID failed to give him enough support while he was carrying out his work in Cuba.
USAID may not have complied with its own counterintelligence manual (see 22-page document), failing to detect and adjust to the threat level in Cuba.
It certainly seems that both DAI and USAID abandoned Gross at some point after his arrest in Cuba and Gross's wife, Judy, took action, hiring Washington lawyer Scott D. Gilbert.
At first, the two sides tried to resolve the matter quietly.
On April 19, 2010, USAID offered to pay Judy Gross $202,000 "in exchange for a full release of liability," Gilbert wrote in a Dec. 2, 2011, letter to USAID.
"Mrs. Gross refused and on June 18, 2010, USAID authorized payment of that amount without resolving Mrs. Gross's claim against USAID," Gilbert wrote.
"Although we appreciate the interim payment by USAID, the sum paid does not begin to compensate Mrs. Gross for the harm she has suffered and continues to suffer because of USAID's conduct."
In their conversations with USAID in December 2011, Gilbert asked USAID to pay damages of $10 million for Judy Gross and $20 million for Alan Gross.
On Nov. 16, the Gross family sued DIA and USAID and the amount requested climbed to $60 million, according to Reuters and other news organizations. I haven't seen that number listed in any of the court documents (See lawsuit).
The Gross lawsuit says DAI only cared about profits, rushed the Internet project despite Gross's safety concerns and threatened to pass the contract to someone else if he couldn't get the job done.


The detention and imprisonment of Mr. Gross are the direct consequence of the reckless and grossly negligent conduct of USAID. 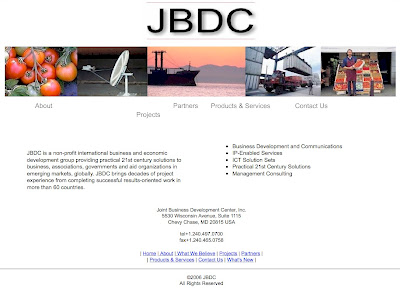 More information about JBDC is below:


founder and executive director of JBDC. He has worked in nearly 60 countries in areas of economic and business development, trade and investment, market development, institutional monitoring and evaluation, and organizational development.

At the time, JBDC listed one full-time employee - Alan Gross - along with 21 part-time employees and 11 volunteers.
The 2005 tax form, filed in April 2006, listed three accomplishments:

Gross evidently did not file tax forms for JBDC in 2007, 2008 or 2009, and the IRS automatically revoked JBDC's exempt status.
Records showed the following company description in 2005: