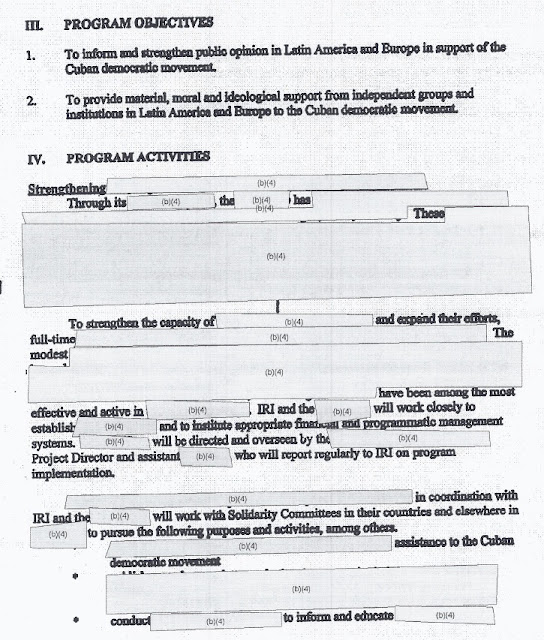 More than a year ago, I filed Freedom of Information Act requests for documents related to International Republican Institute programs in Cuba.
Earlier this week, I received two fat manila envelopes from the U.S. Agency for International Development. They contained more than 100 pages of redacted documents related to Cuba programs that IRI carried out from 1997 to 2008.
USAID withheld cost breakdowns, names of programs and other information.
The agency explained its reasons in two similarly worded Oct. 24 letters (download here and here):


The information being withheld would compromise the confidentiality of the program and its contents. The Agency reviewed the arguments by the submitter, International Republican Institute, and believes the release of this information could reasonably be expected to cause competitive harm if released.


Releasing the names of individuals in Cuba receiving assistance from the U.S. government could subject them to threats, intimidation, harassment and/or violence. Release of these names could compromise the effectiveness of the program and jeopardize the security of the program employees.

The USAID's response underscores the secret nature of IRI's Cuba programs. It also conflicts with what agency official Mark Lopes told the Associated Press in February 2012:


Nothing about USAID's Cuba programs is covert or classified in any way. We simply carry out activities in a discreet manner to ensure the greatest possible safety of all those involved.

The Department of Defense Dictionary of Military Terms draws a distinction between covert and clandestine:
Gen. James R. Clapper, Jr., the Pentagon’s former Under Secretary of Defense for Intelligence, told the Senate Armed Services Committee that a clandestine operation may be intended to be secret, but "can be publicly acknowledged if it is discovered or inadvertently revealed," according to a Dec. 27, 2011, Congressional Research Service reported called, "Covert Action: Legislative Background and Possible Policy Questions."

USAID's programs in Cuba are intended to influence political and economic conditions on the island. It's also clear that the agency would like to keep secret most details of its Cuba programs.
(See the documents USAID sent me here: 1997, 1999, 2000, 2003, 2005, 2008).
One document cites the importance of sending foreigners to Cuba rather than Americans to avoid arousing suspicion. It said:


Because of the contentious nature of U.S.-Cuba relations, it is often easier for nationals of other countries to contact Cuban activists and citizens and provide different forms of assistance.


I understand the need for discretion in Cuba, but where is the accountability to taxpayers?
In December 2011, USAID released only bare details of Cuba program audits that cost taxpayers nearly $1.5 million (See "USAID audit cost taxpayers nearly $150,000 per page?").
Americans have no way of knowing how their tax dollars are spent or whether the Cuba programs are effective. USAID is not accountable to taxpayers or even lawmakers.
If USAID were an intelligence agency, Congress would have oversight responsibility. But since USAID is a development agency, it can conduct clandestine operations without legislative oversight.

USAID argues that identifying aid recipients in Cuba could expose them to harm. I agree and am not suggesting that individuals be identified. But the agency also withholds the names of subcontractors in the United States, which violates the spirit of the Federal Funding Accountability and Transparency Act.
The Transparency Act required the Office of Management and Budget to establish a single, searchable website where taxpayers could find information on grants, awards and other financial assistance.
That website is called USASpending.gov. By law, it should list subcontractors that receive $25,000 or more. But IRI's subcontractors aren't there - at least I couldn't find them.
I searched for two known IRI subcontractors and the USASpending.gov website inexplicably spat out an impossible result:
The subcontractors weren't in that mess of names and numbers.
I looked for answers in the documents that USAID released in response to my FOIA request, but they didn't show the subcontractors, either.
The documents say USAID gave IRI a one-year grant worth $335,462 on Nov. 19, 1997.
The IRI project was "designed to increase international support for the internal democratic movement in Cuba."
USAID said the grant money:


will support Cuba's internal democratic movement by informing and educating their domestic communities about the movement and the realities confronting it and by providing material and moral assistance to Cuban activists and citizens.

With the fall of communism in Eastern Europe and the break-up of the Soviet Union and Warsaw Pact, however, Cuba lost the economic subsidies and much of the political support that had helped sustain the government in power, and for the first time visible cracks developed in the system.

The agency said human rights organizations had expanded over the previous five years, but the democratic movement would not grow without outside support.
The 1997 grant agreement read:


In many countries, little or no accurate information is available about the Cuban democratic movement, and where such information is available, it is often viewed with suspicion. As a result, most of the consistent public support for pro-democracy activists in Cuba comes from the United States, which enables the Cuban government more easily to portray the internal activists as agents of the U.S. government and to repress them in the name of national security.

Because of the contentious nature of U.S.-Cuba relations, it is often easier for nationals of other countries to contact Cuban activists and citizens and provide different forms of assistance. In response to these realities, the (redacted) initiated the (redacted).

The 1997 program goals were:
By 2005, a "new dynamic" had emerged in Cuba, USAID said. According to excerpts of the IRI documents:


Political repression has become more costly to the Cuban regime, which is heavily dependent on attracting foreign investment and thus sensitive to international public opinion. Following the crackdown of 18 March 2003, multilateral action in support of democracy and human rights in Cuba emerged for the first time in decades. The governments of Latin America, the European Union, and the United States, universally condemned the political repression of Cuba's burgeoning democratic activists and independent civic leaders.

Closely following the 18 March crackdown was the summary execution, by firing squad, of three men convicted of hijacking a passenger ferry. the three men were tried and found guilty by the Cuban legal system, in which the judicial outcome is politically controlled by the executive branch of the Cuban government. the international community universally responded to these executions, resulting in diplomatic and economic measures against Cuba, as well as negative publicity for the Cuban government.

Exploiting the negative publicity surrounded by the government's lack of respect for human rights and political freedoms is facilitated by the existence (redacted) about the activities of Cuban dissidents in the face of repression.

Due in part to IRI and (redacted) and advocacy work in (redacted), first time the (redacted) resolution condemning human rights record was presented and supported by unanimous coalition of (redacted).

As Cuban activists struggle non-violently to forge a free society for the island's future, they contend with the Castro regime's decision to perpetuate and prolong a closed political system at all costs. now more than ever, as democracy manifests itself as a viable alternative for the island's citizenry, Cuba's democrats need increased moral and logistical aid (redacted).

The carefully sanitized documents that I received in the mail are dramatically different from internal IRI documents that surfaced on a Cuban website called Miradas Encontradas. The website posted three documents that describe the organization's work in Cuba. You can download them here:
The documents name some of the organizations that work with or or have received funds from the IRI. These include:
The Sectors of Change report said IRI was working to expand basic freedoms through what it described as "flash points of change."


Change in Cuba is not arriving at the wholesale level in the form of overwhelming public demand for change. Instead, we witness change happening at the retail-level on thousands of different fronts. This retail level change is the everyday transformations within Cuba that pass by unnoticed, are perceived as non-threatening, or cannot be controlled en masse. They manifest themselves as tattoos, spiked hair, music jam sessions, student groups, black-market CDs, bonfire discussions at the beach and graffiti art.

The Hastening the Transition report described efforts to boost access to technology and the Internet:


Since the summer of 2008, IRI has worked with a faith-based organization in Cuba to provide Internet access to its constituents. At great effort, this organization managed to locate computers on the informal market and to arrange for foreign friends to act as intermediaries to contract private Internet connections. These connections are now shared at twelve (12) locations across the island in at least 8 different provinces, through which they are accessed by dozens of users at each access point resulting in Internet connectivity for hundreds of Cubans across the island. this partner has also been an important source of information about Internet use in Cuba and ways to obtain it.

One report cited efforts to give Cuban activists BGAN satellite modems, the same kind that landed American Alan Gross in jail in December 2009.
IRI complained about USAID rules limited the organization's ability to give cash to Cuban activists:


There is an urgent need for action before this issue further affects IRI’s programs and partners in Cuba. IRI has repeatedly stayed activities in this area since the grant was approved in August 2008. This delay has now reached a critical point. As the seventh month in a two-year grant cycle approaches, IRI must emphasize that further delay in reaching an agreement on these specific procedures (for which IRI has already demonstrated and programmatic accountability under previous grants) will seriously impair or prevent IRI from achieving grant objectives and cause further difficulties for the Cuban partners that this grant is intended to help.

IRI certainly had cash to burn. By 2010, the federal government had given the organization more than $13 million for its Cuban programs.
Posted by alongthemalecon at 5:01:00 PM