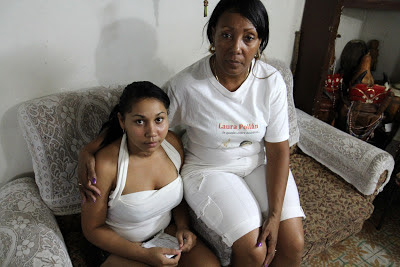 The 15-year-old Cuban victim of a knife attack and her aunt, a member of Las Damas de Blanco, say they plan to request political asylum from the U.S. government later this month.
Berenice Héctor González, now in Havana, told me a woman attacked her with a pocket knife on Nov. 4 while she was talking on a public phone outside her home in the central town of Cienfuegos.


When I turned around she said, ‘Las Damas are shameless and whores, and don’t talk to my boyfriend anymore.’ 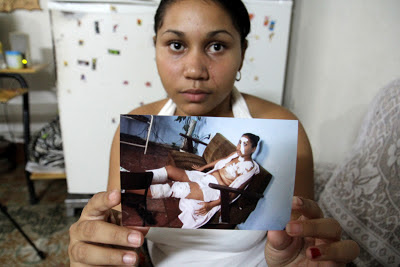 The 10th grader said she felt something wet on her face and didn’t realize it was her own blood.

Berenice said she then collapsed as her 19-year-old attacker slashed her neck, breast, arms, legs and back. I wrote a story about her and other dissidents for USA Today. Below is some of the backstory, details that didn't appear in the "Nation's Newspaper."
The savage assault on Berenice has been widely reported as politically motivated. Elizardo Sanchez, director of the Cuban Commission for Human Rights and National Reconciliation in Havana, said he is still looking into the crime and can’t say what caused it.
But he said authorities should punish the assailant, no matter the motive.
Adonis Subit Lamí, a professor at the Centro de Estudios de la Radio y al Televisión Cubana and the Instituto Internacional de Periodismo José Martí in Havana, contends that politics had nothing to do with the attack.
Subit Lamí posted a YouTube video of an interview with the mother of the accused 19-year-old attacker and her boyfriend, Eduardo Antonio Soriano Díaz.
Both the mother, Idalia Díaz Calderón, and the boyfriend deny that the assault was political. Said Soriano Díaz:


Anything said to the contrary is a big lie.


Again, this was an unfortunate quarrel between two young people that could have happened in any dark corner of the world, but it ended up in a rough political campaign of disinformation, which is only intended to discredit Cuba to the world.

Subit Lamí said it's also untrue that the accused attacker, Dailiana Planchez Torres, is not being prosecuted. He said she was arrested and later released to await completion of legal proceedings because she was pregnant.
Berenice and her aunt, Belkis Felicia Jorrín, say that the 19-year-old has since suffered a miscarriage and is out of jail in the central town of Cienfuegos. They are skeptical she'll be prosecuted and contend she is getting preferential treatment because her father is a purportedly a security or police official.
I don't know what's true. It's a muddy case. Sometimes, Sánchez told me, motivation can be traced to both politics and personal reasons. In this case, the personal motive may have been jealousy over the boyfriend. 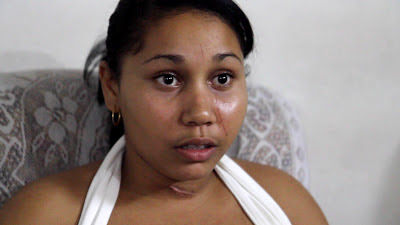 Berenice - I've also seen her name written as Arlet Verenise - denies jealousy had anything to do with it.
The teen-ager said she has left school and is living with her aunt in Havana. She said:


I am afraid to go back to Cienfuegos.

Among my takeaways from the sad episode:
José Cardenas, a former acting assistant administrator at the U.S. Agency for International Development, told me that U.S. immigration and asylum policies toward Cuba have "evolved into an escape valve." He said:


It's more of an option to leave and keep your head intact instead of challenging the government. You see what's going on in the Arab world. People have no options left. They have nothing to lose. But in Cuba's case, if people believe there's a shot of leaving and going to the United States, they're going to opt for that. It's human nature.

When James Cason was chief of the U.S. Interests Section in Havana, he told me that the democracy movement needed victims. It needed blood.
His thinking, as I understood it, was that high-profile victims would help rally support for dissidents' cause. That makes sense.
And we've seen that critics of the Cuban government have highlighted a string of victims, including


In the eyes of some members of the Cuban opposition, Cuban authorities "killed" these and other activists and that will remain the cause of their demise no matter what the facts may eventually show.
I'm not saying they are right or wrong, but I think it's clear that Payá, Pollán and other fallen dissidents are weapons in the information war over Cuba. They are cannon fodder in a ferocious, but low-intensity U.S.-Cuba fight.
The 15-year-old knife attack victim fits the narrative, whether or not politics figured in her assault.
The U.S. government promotes and finances the same story: Cuba is a disaster, a giant prison where dissidents are beaten, harassed and jailed every day. And the tales are spread on blogs and websites, some of which likely receive U.S. government funds.
Mainstream media - which I've been a part of for almost 30 years - picks up on and often emphasizes the same narrative. We don't find a need to report other stories, like the fact that Cuba ranks 51st on the U.N.'s Human Development Index, putting it ahead of most other nations in Latin America and the Caribbean in health, education and other areas.
We in the media would rather tell the stories as black and white. We're not always as good at describing the grays, the in-between that is full of nuances.
Supporters of the Cuban government complain about that tendency. Lázaro Fariñas, a Miami-based journalist, wrote:


Each time that Cuban authorities arrest any so-called dissidents on the island, the mainstream press invariably says the arrest was made ​​with a beating. It doesn't matter if videos taken during these arrests demonstrate otherwise.

I don't doubt that some dissidents are mistreated. At the same time, it would not surprise me to learn that a dissident might exaggerate an abuse or injury for his own purposes - to push his cause, to show his funders that he is having an impact, or to obtain political asylum.
I'm sure some people would dispute that notion. What's certain is that the U.S.-Cuba fight is a no-holds-barred, sometimes dirty, always passionate "battle of ideas," and all sides use information to advance their causes and to affirm what they believe.
Clusters of blogs supporting one faction or another are part of the machinery. They are affirmation machines, clicking and tweeting, passing along what they believe, rejecting what they don't, spreading the word. We bloggers all do it.

Back on the front lines in Cuba, Antonio Rodiles said dissidents' battle against the Cuban government is an unequal and unfair fight. He is founder of Estado de SATS, a group created to promote dialogue and civility. He told me it's difficult to challenge what he described as a "totalitarian government" that controls almost all aspects of life on the island.
Other members of the opposition agree. They say the Cuban government has wide-ranging powers and they can’t hope to fight it without outside support.
José Daniel Ferrer, head of the opposition Patriotic Union of Cuba, said he tells security officials that if he had only 5 percent of their “gigantic” budget, “I could democratize Cuba in six months.”
In March 2003, Cuban authorities jailed Ferrer and 74 other activists and gave him a 25-year sentence.
He was among the last of the 75 to be freed in 2011 as part of an agreement between Cuban authorities and the Catholic Church.
Cuban authorities keep Ferrer under tight surveillance. They make no apologies for acting against dissidents who they contend are financed and supported by a foreign power, the United States.
Cuban officials resent the criticism of their country's human rights situation. They say it's not as journalists are getting killed in Cuba. It's not like Mexico, they say.
They also complain that American media organizations invariably paint Cuba in a negative light, which they say fuels hostile U.S. policies.
Since 1996, the State Department has spent more than $200 million to promote democracy and undermine the socialist government in Cuba. U.S. funds support political prisoners and their families, along with independent civic, social and political organizations in Cuba. The American government also supplies dissidents with laptops, cell phones and other equipment.
Rich Haney, author of a sympathetic book about Celia Sánchez, who fought alongside Fidel Castro during the Cuban revolution, is a critic of U.S. policy toward Cuba. He said:


Americans have been programmed to believe it is fine for the U.S. to send Rambos, CIA spy equipment and tax dollars to a foreign nation for the purpose of creating a regime change. If another nation did that to the U.S., the U.S. would be outraged.

Berenice, the knife attack victim, is caught in the middle of this half-century-old Cold War mess. She is a victim. And at 15, she already bears the scars, terrible scars, no matter what caused her attacker to strike.
Posted by alongthemalecon at 4:22:00 PM

In Cuba there is no need be from the opposition or dissidents groups to be a victim of an unjust, intolerable and discriminatory Government.
Not all "counter-revolutionaries " are opponents and not all opponents are "counter-revolutionaries".
A very simple sentence that the Castros put into practice since the beginning of its terrorist revolution in 1959: “With the revolution everything, without revolution nothing"; That translates to: If you are one of them (Communist) will have everything, if you're not one of them will not have anything, and that includes human rights and even the lives of many Cubans who have dared to disagree with the Government. Those who are not Cubans and are condescending with the dictatorship regime, should live in Cuba as the 99% of the population, without any privileges and rights, and maybe then they would think different.