Poor, poor Alan Gross.
A New Jersey insurance company denied Friday that it owed any money to Gross, an American development worker jailed in Cuba since 2009.
A lawyer for Federal Insurance Company said Gross wasn't covered under the kidnap and ransom policy that Development Alternatives Inc., or DAI, purchased in 2009.
Under the $5 million policy, Federal agreed to pay Bethesda, Md.-based DAI certain costs if any of its employees were wrongfully detained.
Cuban authorities arrested Gross in December 2009 and accused him of bringing satellite communication gear into the country in violation of Cuban law. He was later sentenced to 15 years in prison.
Gross and his wife, Judith Gross, sued Federal on Nov. 16, saying they were entitled to compensation under the policy. But Lisa R. Bonanno, a Washington, D.C., lawyer for Federal, said Gross wasn't eligible to collect any money.
In court documents filed Friday, Bonanno cited three reasons:
Bonanno also said the Gross family's lawsuit against Federal could not be settled until a separate lawsuit they filed against DAI had run its course.
The Gross family sued Federal for past and future legal fees, medical expenses and other expenses. They alleged "breach of contract" and "failure to act in good faith," and said Federal refused "to fulfill its contractual obligations."
They also said Federal had paid $2.3 million to DAI and other parties because it wanted to deplete the $5 million policy limit and avoid potentially greater payments in the future.
Federal denied that in its Jan. 4 response to the lawsuit. It said the Gross family isn't alleging that DAI has paid any of the specific expenses that they seek to recover.


As a result, no insurable “loss” has been sustained, and Plaintiffs’ claims fail as a matter of law.

Federal also reserved the right to challenge Alan Gross's claim that he was insured under the policy since DAI's subcontract was with his company, JBDC, and Gross "was not actually an 'independent contractor' of DAI."
I don't understand that argument. JBDC was Gross's company. Suggesting that DAI signed a deal with someone other than Gross seems ridiculous to me. It highlights the insurance company's seeming obsession with profit over people, precisely the same impression that DAI gives.
Oddly, the insurance company court filing describes DAI as "a non-profit organization that works on international aid and development projects around the world." 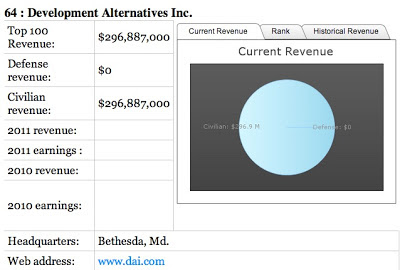 I thought DAI is a for-profit company, not a non-profit firm.
In 2012, Washington Technology ranked the privately-held contractor at 64th in its Top 100 list with $296,887,000 in revenue. That doesn't sound like a non-profit venture to me.
There is a non-profit company called Development Alternatives in New Delhi. Maybe Federal somehow confused DAI with that company. Strange.
The Gross case isn't Federal's first brush with controversy. The company also insured The Second Mile, the charity that former Penn State football coach Jerry Sandusky founded in 1977. Sandusky is a convicted serial child molester serving a prison term of at least 30 years. He met his victims through the Second Mile, aimed at serving underprivileged and at-risk youth.
Posted by alongthemalecon at 1:00:00 AM

Kidnap and ransom policy? Here is what Alan Gross was really doing in Cuba: http://news.yahoo.com/ap-impact-usaid-contractor-cuba-detailed-163756902.html

yeah, I wouldn't describe it as a kidnapping. the insurance documents use the term "wrongful detention." and whether is was "wrongful" depends on whether you agree with what Gross was doing in Cuba.